This cottage locates in the rural area where there are many small weekend houses that the big-city-based citizen cultivates the fields.
The cottage on the slope faces to the valley that isn’t beautiful.

It was difficult to stretch a floor for the whole area on the severe budget. So, We planned to utilize the natural slope as a substitute of the floor. It shakes the usual relation between the architecture and landscape. In this villa, a landscape is one of architectural factors.

The angle of the house is united with the direction of the slope. While the axis of the column and beam adapt to north and south, east and west that are axis of the earth.

The villa is composed of three parts: floating space, slope space and step floor space. The floating space is used as living and sleeping space.

The slope space is opened widely to the valley. A part of the space serves as stairs of concrete. In the step floor space, the rooms with functions are arranged in accordance with the slope, .

The interior roof was hung on a part of the step floor rooms. It forms an atmosphere of the ‘house in house’, as if the interior had metamorphosed in the exterior.

The exposed slope prolongs to the outside, and the structure frame is disposed adjusting to four cardinal points as the worldwide coordinates.

Those devices give a mental spread and a metaphorical spread for the limited floor area. The sense of the indoors and outdoors will be vague. Outdoors invades to indoors. Those leads this cottage to the wider world. 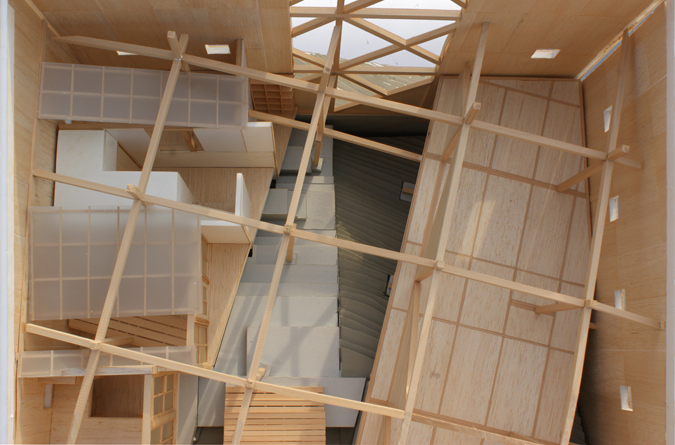 See the interior from above. On the left hand is a step floor with a kitchen and a sanitary space. In the center is a slope where the landscape is exposed. On the tight hand is a living room with a floating floor which doubles as a sleeping space. The building is disposed according tothe direction of the slope, menwhile the frames of a beam and a pillar are arranged accorcing to four directions. 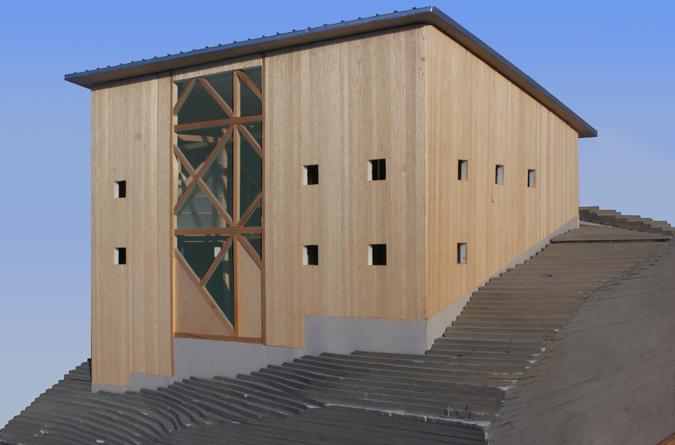 See the exterior appearance. The building is disposed according tothe direction of the slope. 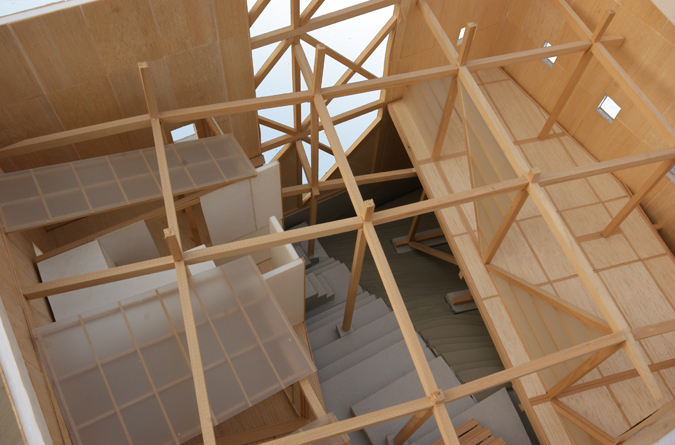 See the interior from above. 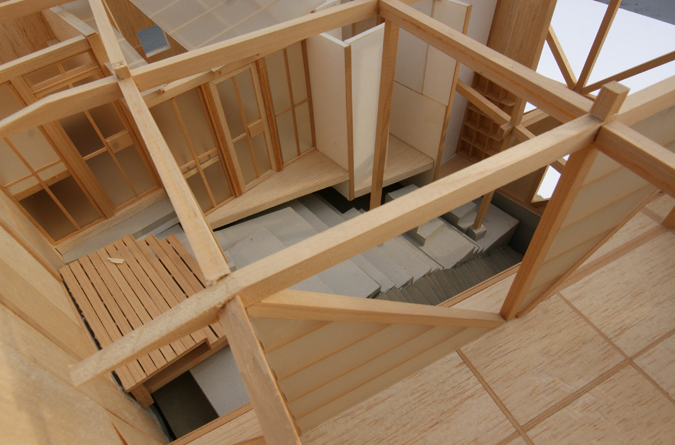 See a step floor with a kitchne and a sanitary space from a living room on a floating floor. 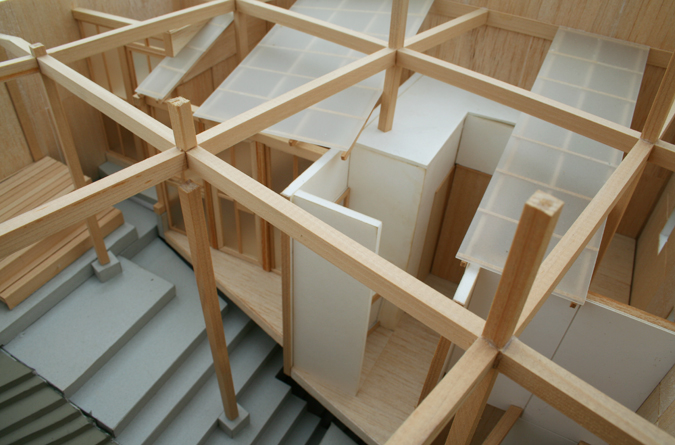 See a step floor with a kitche and a sanitary space. 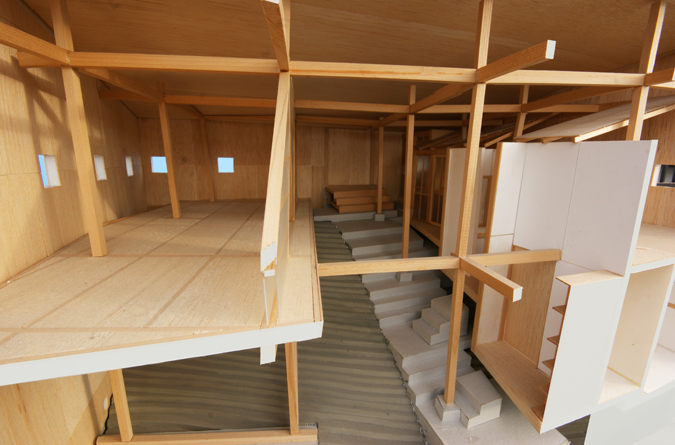 See the section of the building from the valley side. On the left hand is a floating space used as a living room as well as a sleeping space. Under the floating floor and in the center is a slope where a landscape is exposed. On the right hand is a kitchne and a sanitary space. 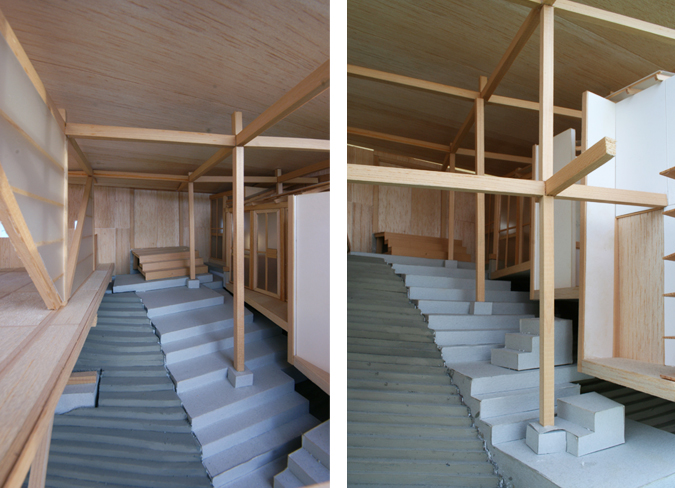 The slope where a landscape is exposed. 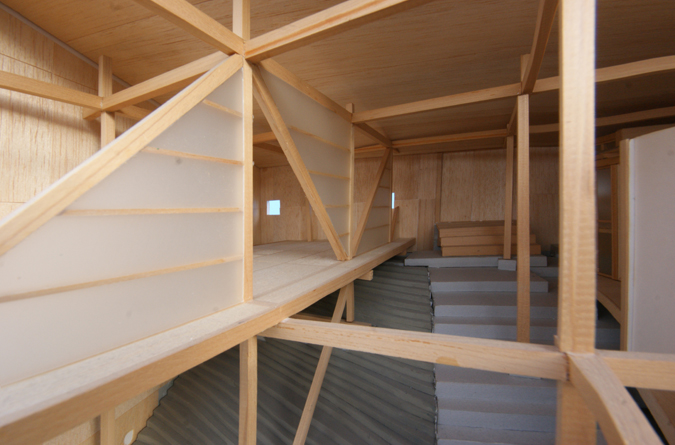 See the floating floor from the valley side.. 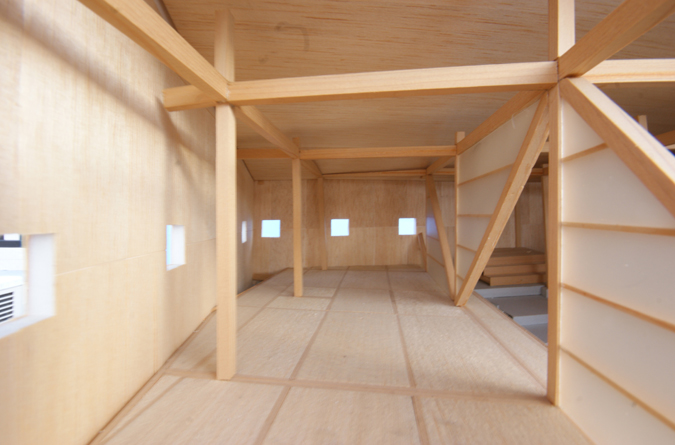 The interior of a living room on a floating space which doubles as a sleeping space. 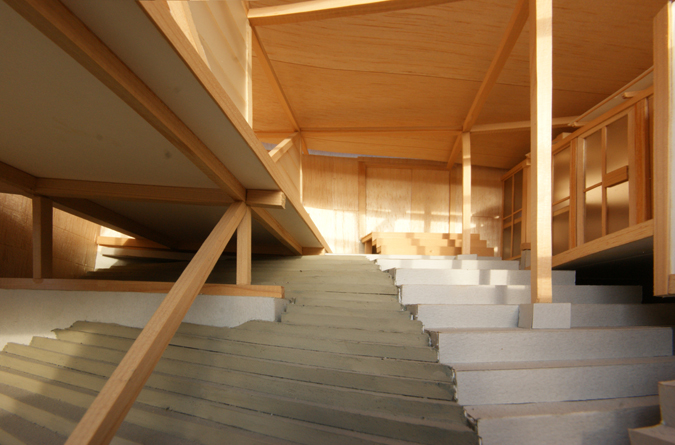 See the interior from the lower part of a slope.