James Turrell planned the place where the West encounters
the East. The West meant the comtemporary art that the art by
Turrell represented, while the East was defined as a locality
based on the topos of this region.

Based on that plan, the place was designed as the East reflecting the context of the local architecture and making fit the art to the reality not as
a temporary object but as a permanent architecture where
the visitors stay with safety and comfort.

The newest equipments for air-conditioning, cooking, snow-melting and roof-sliding were installed with the design that did
not fail the tradition style in both of the exterior and interior.

In the interior, the divers arts are scattered.

In Outside Inn, at the suset time, the roof are opened and the sky appears. The visitor experiences the light art work between 1 hour.

In Light Bath, the visitor experiences an illusionary bathing
by the effect of the optical fiber lighting installed in the water.

The exterior appearance was designed based on ‘Sei-gai
Dukuri’ of the traditional style in the region for getting the
continuity with the architectural context of the region.

The interior was designed as a traditional Japanese style.

Through the design of the exterior and interior, the archi-
tecture got the image of the traditional family house.

Due to the heavy snow, in the winter, the regional economy
becomes severe. But, the region is not appropriate to the
ski industry.

This accommodation was also planned in order to create not only an increase of visitors in the summer but also a demand in the tourism industry and a spot for working in the winter, in the regional planning ‘Echigo Tsumari Art Necklace Project’ . 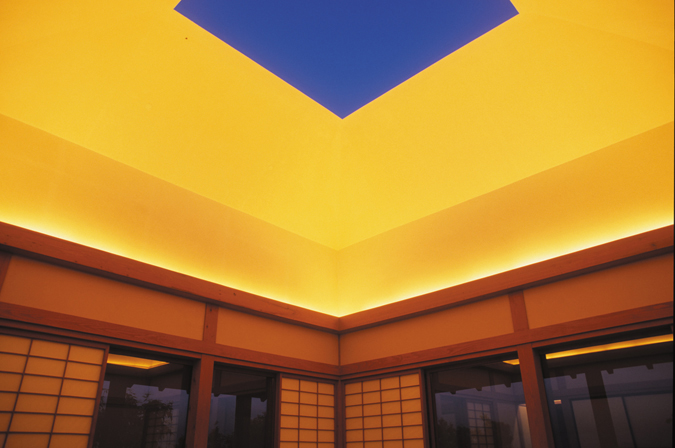 Outside-In on the 2nd floor. When the roof is opened, a guest can see the sky indoors. Turrell's art is a program to see the sky at sunset for an hour. 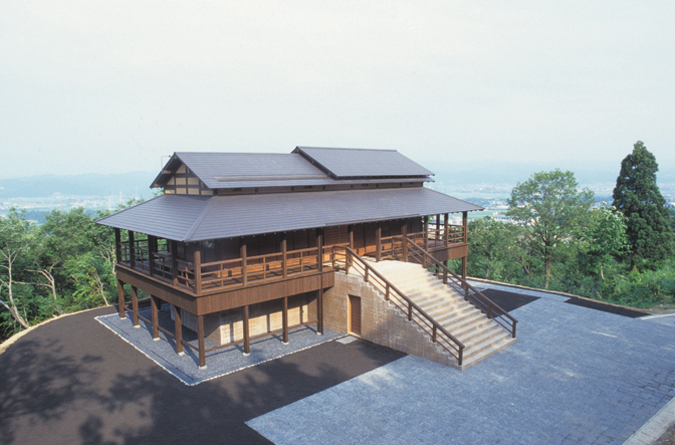 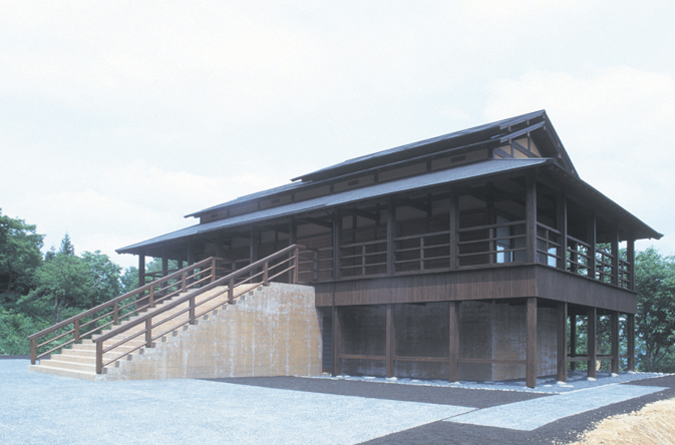 The western appearance. It imitates the traditional construction way of the area. The first floor is built with reinforced concrete and the second floor is bilt with wood. The corridors run around the four sides on both the first and second floors. 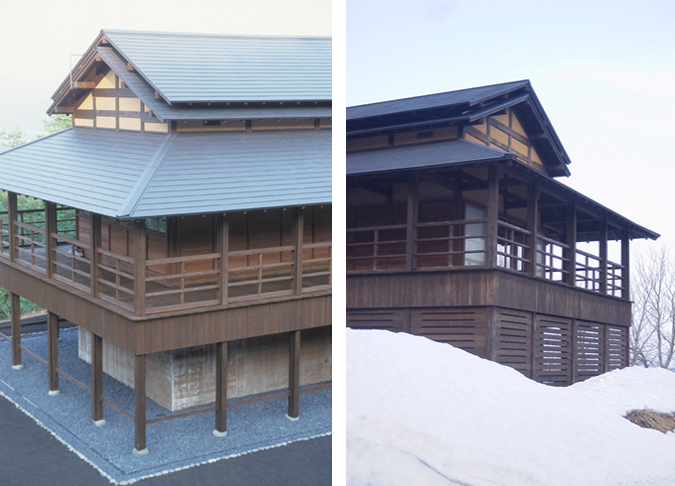 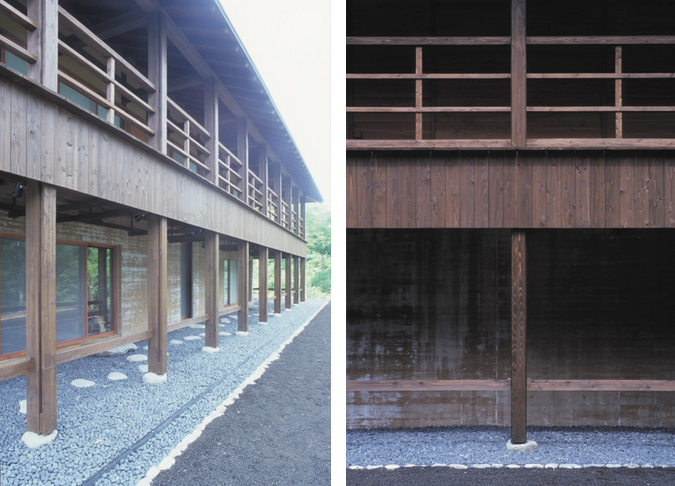 The appearance of the corridors on the first and second floors. A snow fence is fitted on the outside of the pillar. In the winter, snow accumulates at least near the second floor level. 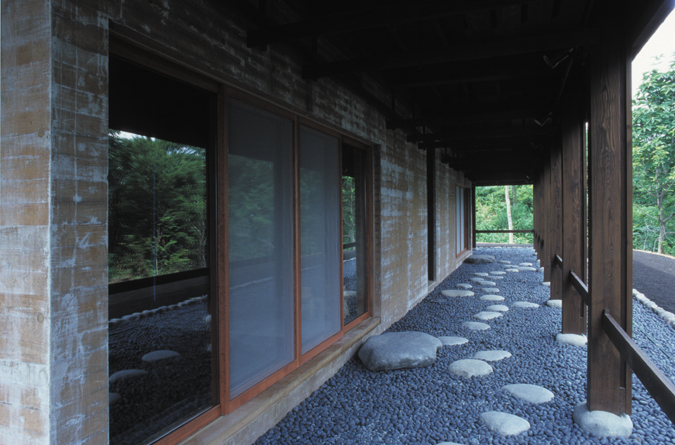 The corridor on the first floor. In the winter, it is covered with snow, so the pillars are fitted with snow fences. The stepping stone takes from the outside to the Garden Room. 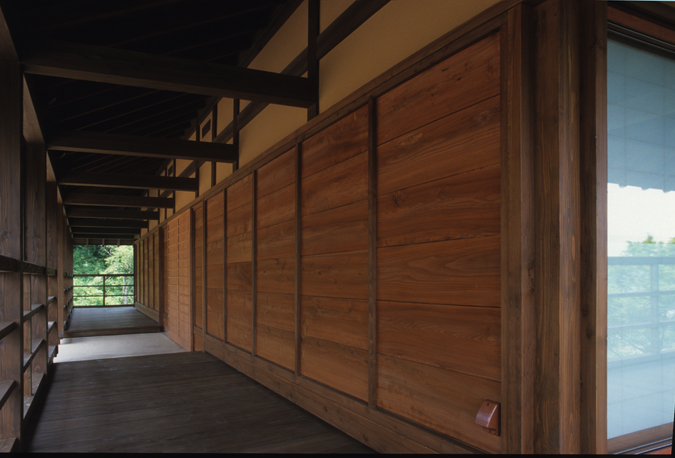 The corridor on the second floor. It is 2m wide and a guest can eat here in the summer. The floor is made of thick cedar board, and the walls are made of cedar siding. 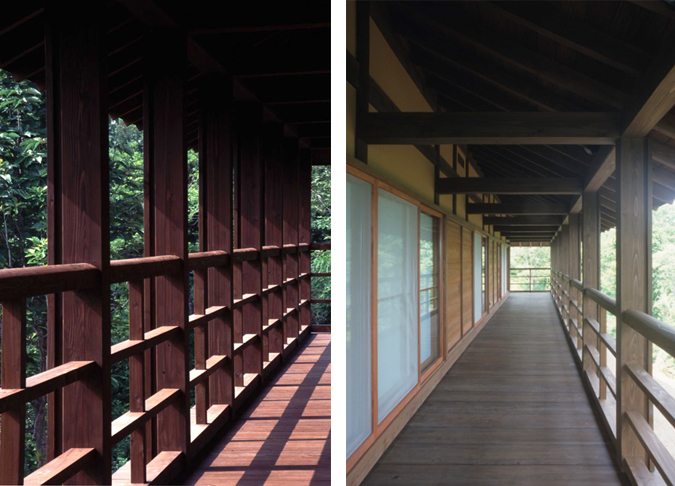 The corridor on the second floor. 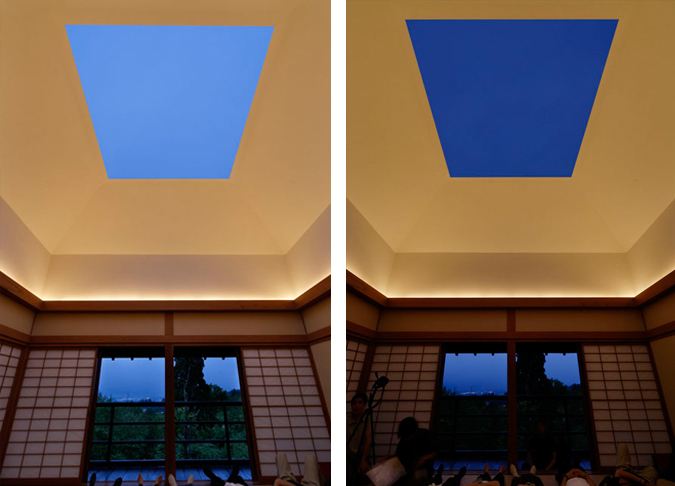 According to the effect of the lighting of Turrell installed on the upper part of the wall, the human eye illusions the color. The sky in the opening dyes in a color different from the actual color of the sky at sunset. Photo: Koji Fujii (Nacasa & Partners). 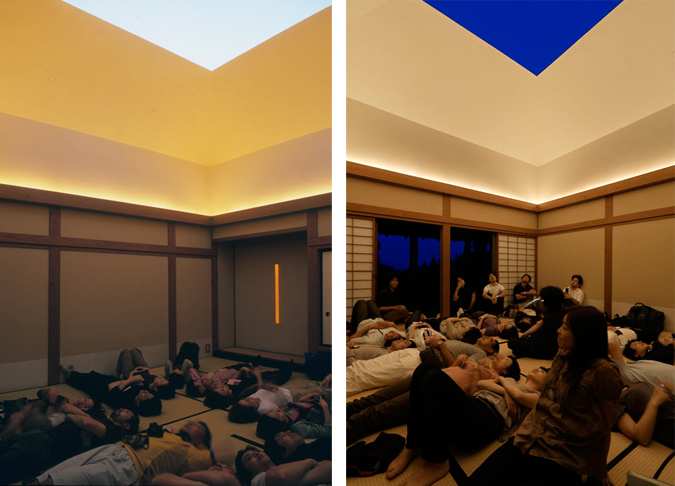 A view of the guests experiencing the sunset program of Outside In by Turrell on the 2nd floor while lying on a tatami mat. Photo: (Right) Koji Fujii (Nacasa & Partners). 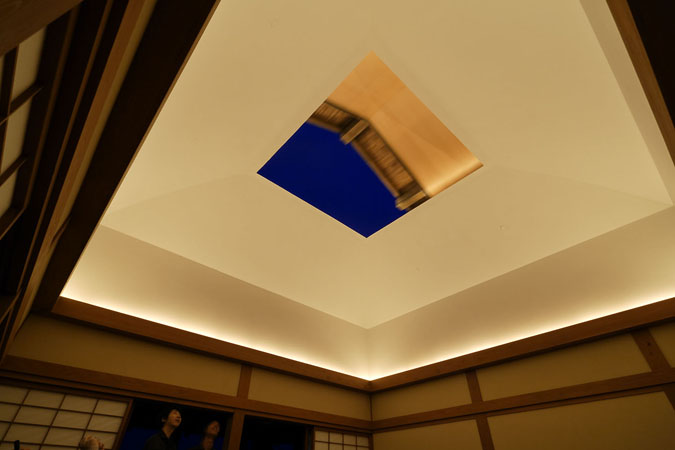 The program at sunset in Outside In on the 2nd floor is over, and the electric movable roof is closed. Photo: Koji Fujii (Nacasa & Partners). 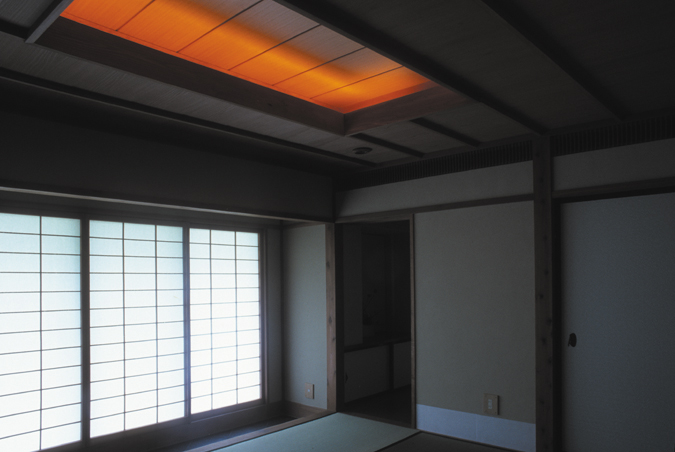 Japanese-style Garden Room on the 1st floor. Turrell's light art is installed near the ceiling and at the entrance. 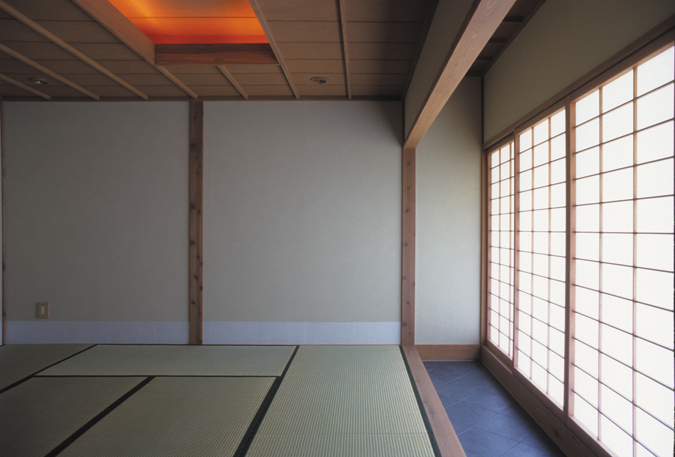 Japanese-style Garden Room on the 1st floor. It consists of an inner space for removing shoes with Gensho stone and a tatami mat room. 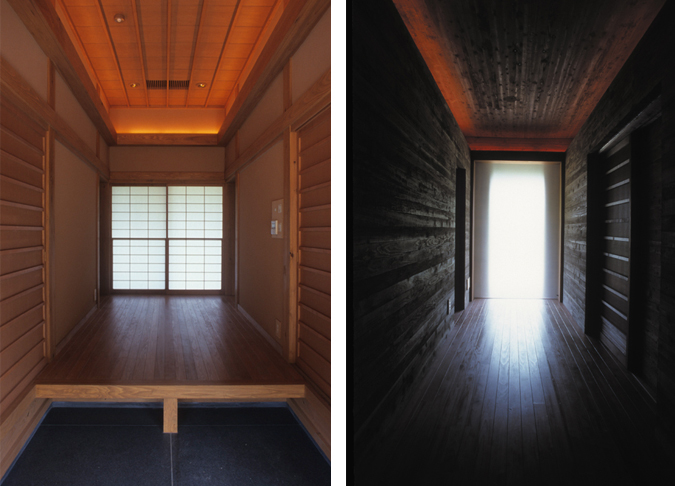 (Left) Entrance on the 2nd floor. A corridor finished with a cedar board and an inner space for removing shoes finised with Gensho-stone. (Right) The corridor on the first floor. Finished with concrete mixed with pigments, using a cedar board formwork. 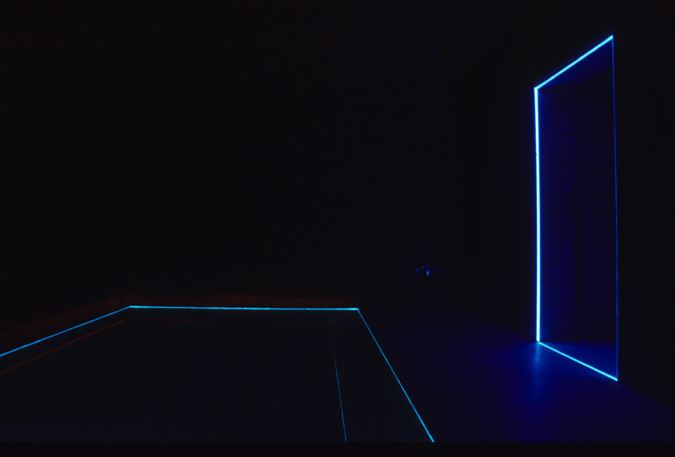 Light Bath, the artwork of light by Turrell installed in the bathroom on the first floor. The optical fiber installed under the surface of the water makes the body in the water glow white, and the body above the water appears black like a shadow. 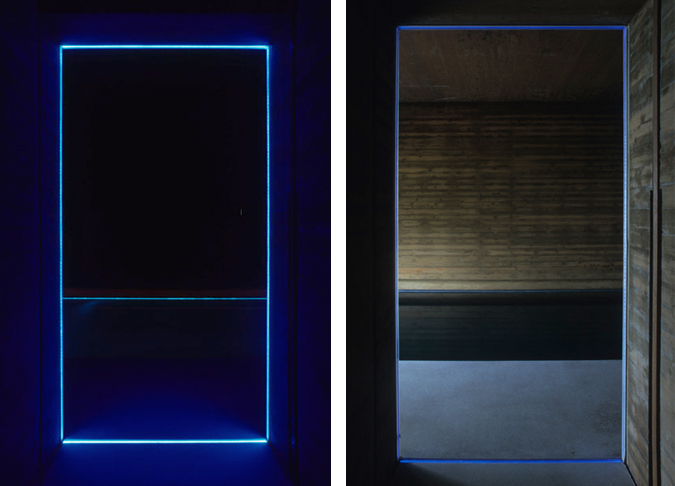 The entrance of Light Bath, the artwork of light by Turrell installed in the bathroom on the first floor. The left photo shows the atmosphere in the night, meanwhile the right photo shows that in the datime. 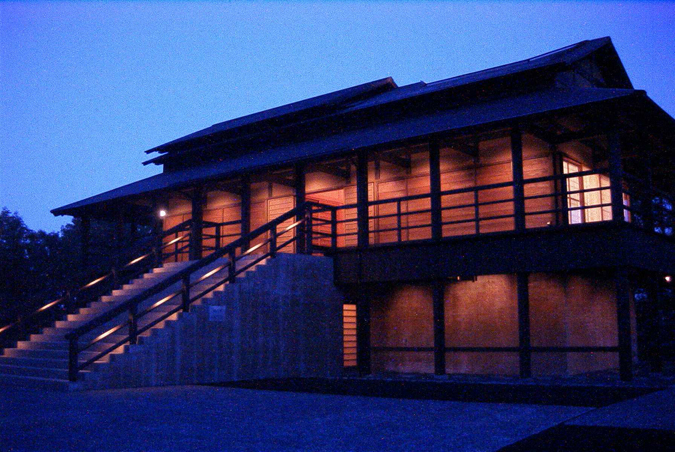 Night view. It emerges in the darkness according to the effect of lighting. 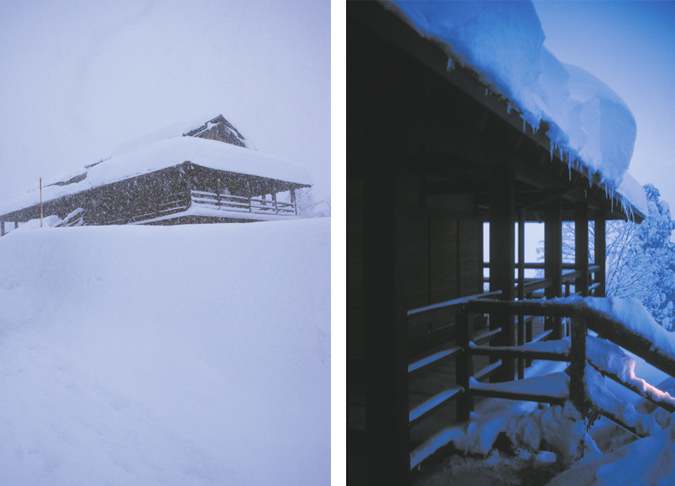 The scenery of winter. An electric snowmelt system is installed on the roof. It gradually melts snow without using manpower. 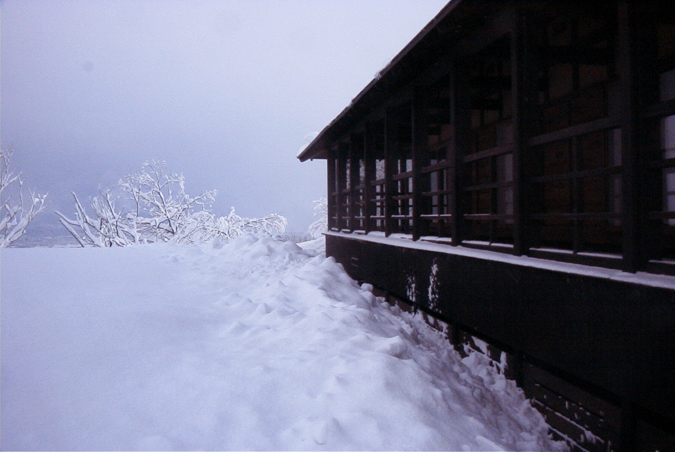 The scenery of winter. Snow acumulates to the height of the corridor on the second floor. On the first floor, a snow fence is set up in front of the pillars to prevent snow from entering. 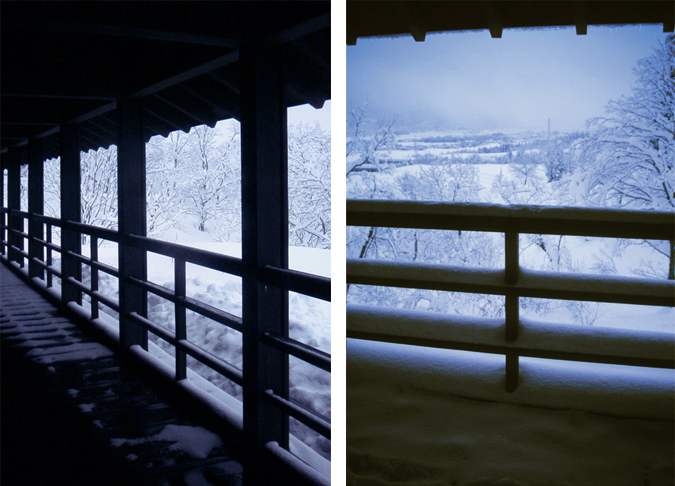 The scenery of the conrridor in the winter. Snow accumulates to the height of the floor on the second floor. The scenery seen from the corridor is different from that in summer.