A renovation project of a Japanese-style house built 40 years ago.
The request of the owner, who works in direction, of contemporary art, was to create a suitable place to accept the artist's stay.
Compared to the Japanese-style rooms in the front space, which was carefully built with the best materials 40 years ago, the simple "service space" upset the balance of the entire house. By renovating around that part, we attempted to create a space that meets the needs and greatly improve the image of the entire house.

The ceiling of the dining kitchen was changed into a coved ceiling as high as possible, avoiding the walls on the second floor. While the Japanese-style rooms on the front space, which are finished with a traditional rod-rimmed ceiling, are regarded as the "ground", the dining kitchen with the coved ceiling illuminated by lighting and the beams that cross it is shown as a "figure". , It becomes the core of the house and the place to entertain the artists who are the guests.

The windows of the renovated part are all doubled to improve the heat insulation performance of the old Japanese-style house. 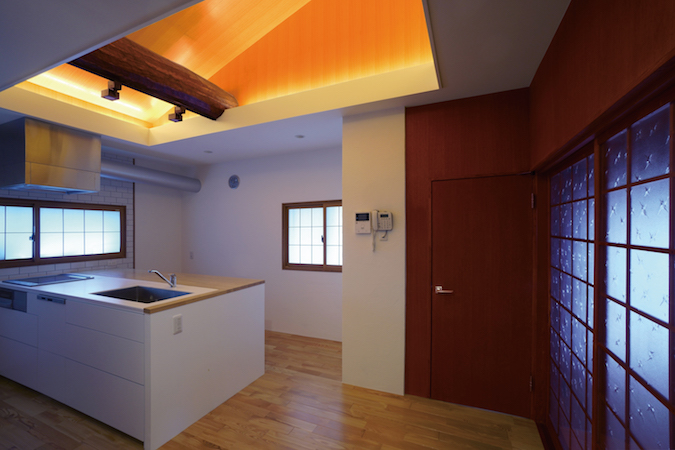 See the dining kitchen Above the island kitchen is a coved ceiling that is created by removing the existing ceiling. On the right hand, the old fittings from 40 years ago remains, and a part of the space is finished with a dyed oak sliced-veneer to match the color of the fittings. Therefore, the existing Japanese-style room on the other side of the fittings becomes continuous the dining kitchen. 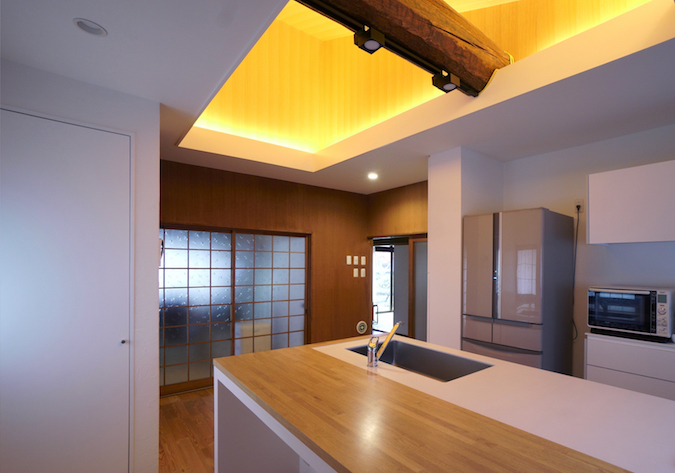 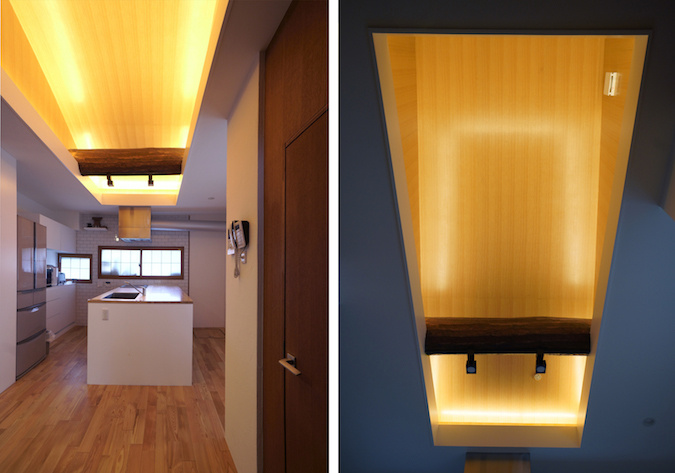 (Left) See the dining kitchen with a coved ceiling at the top. The floor is finished with larch flooring and has underfloor heating.
(Right) Look up at the coved ceiling. Finished with oak wood sliced-veneer. 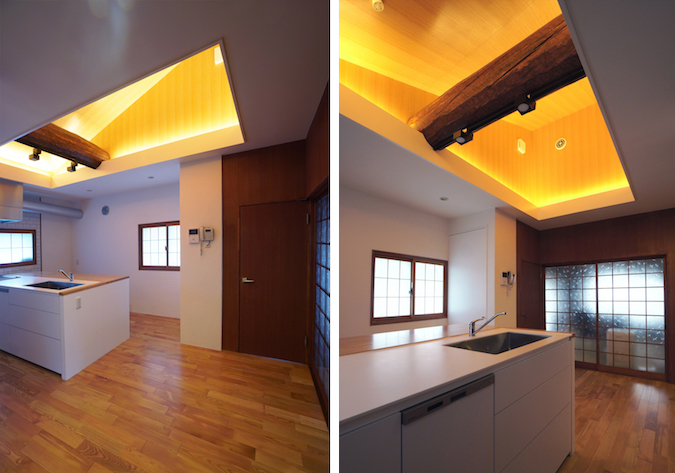 See the dining kitchen. The white walls are finished with diatomaceous earth. 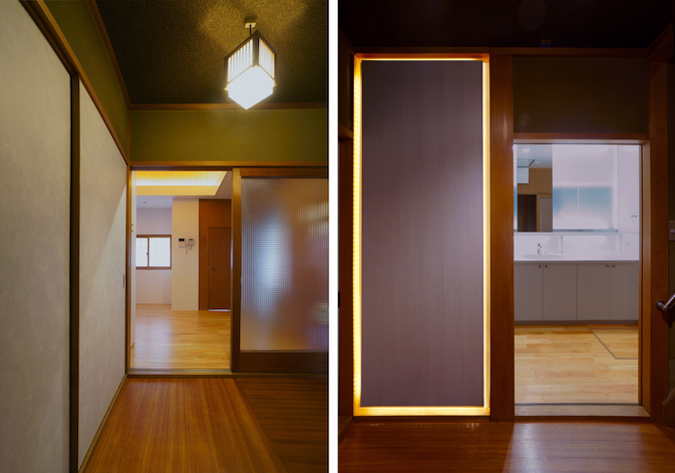 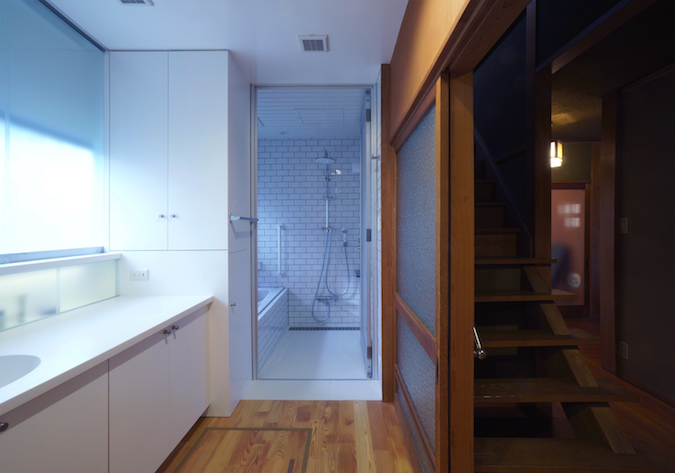 See the washroom and the bathroom beyond it. The wall on the right side of the washroom is finished with oak wood sliced-veneer which matches to the color of the existing wood and the fittings of 40 years ago and the darkness of the room. The renovated new space and the existing space become continuous. 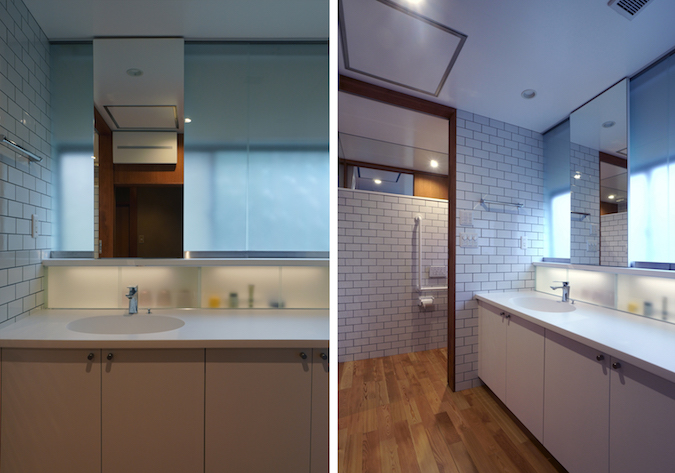 (Right) See the washroom and rest room beyond it. The walls are finished with subway tiles. 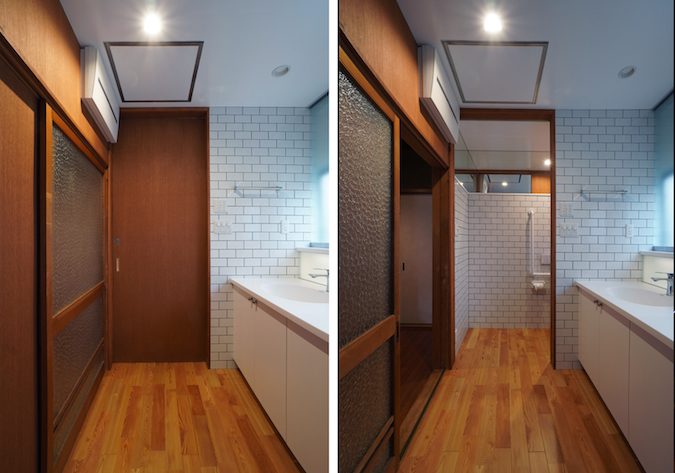 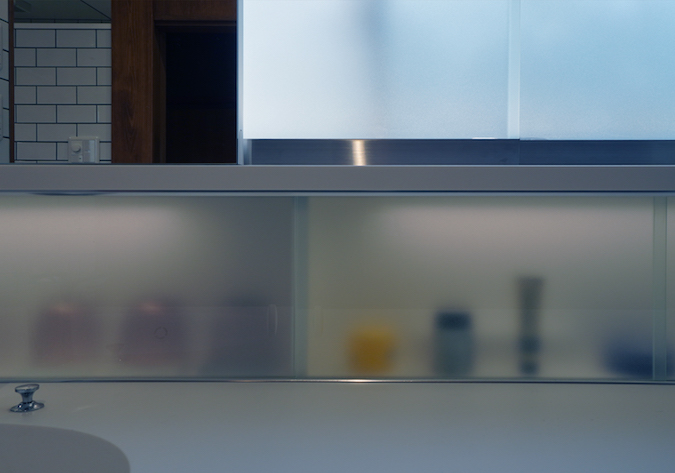 See the glass storage of the washbasin in the washroom. The door made of frosted glass is illuminated by indirect lighting inside the storage, and the things inside are backlit. 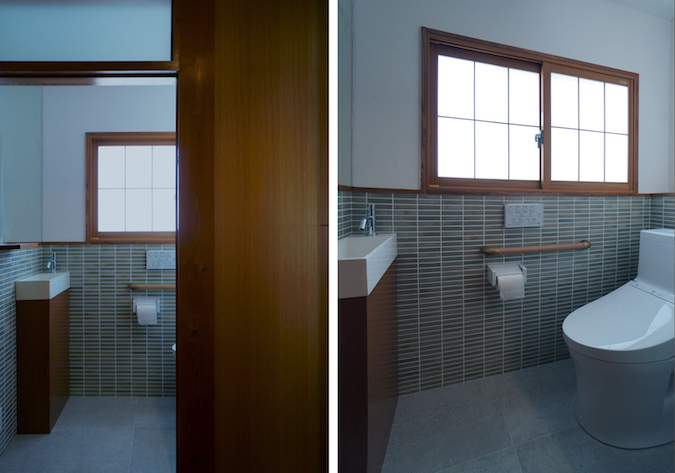 See the restroom on the second floor. I attempted to create a new feeling while becoming continuous with the Japanese atmosphere of the existing spaces by using tiles made with the texture of Japanese pottery.