However, if you can afford to stay one more night in Hachinohe, you should not miss the Oniwa Emburi ( Emburi in the garden) .

The Oniwa Emburi is performed at the Koujoukaku, a residence for a kimono fabrics dealer built in the Meiji era.

In an age when it was individually performed in each village once, it was customary to show dance at the residence of a wealthy farmer or an influential man and the performers received a donation .

The landlady of the Japanese style inn where I always stay told me that she saw it with local people in the mansion of a local elected parliamentarians. So, the Oniwa Emburi was not obsolete with the start of the Issei-Zuri in 1881 but must had not been interrupted until after the World War II.

This Oniwa Emburi is its reproduction. Removed the fittings facing the garden, spreading a traditional scarlet carpet, seats for guests are provided.

Bonfires are burned and a part of the ground of the snow appears whitely. Soon the dance begins. Former rich people enjoyed the Koshogotsu in this way. However, in the Oniwa Emburi of the 21st century, it is quite simple because on a table are only a cup in which a sweet alcoholic drink made from fermented rice is poured and a wooden bowl of a traditional soup of this region, Sembei-jiru.

And, since it is projected with artificial lighting, the air is a little spoiled. if light-up were made with only bonfire, the mysterious profundity would be produced.

It was a explanation by a local TV producer that made me forget such a thing. With his excellent comment, everybody must understand the basis of the Emburi.

Well, another hidden event is the Kadoduke (the Emburi performance from door to door for donation).

For a week of Emburi, you will see Emburi groups going around for the Kadoduke, from the early morning market to the night entertainment district, and in front of a convenience store, a Japanese style inn, a bar and a wealthy big store.

Hum, it is no problem that children, who play entertainment for blessing, perform for the Kadoduke on weekdays without going to school ? Don't worry ! In Hachinohe, children going around for the Kadoduke during the Emburi are treated as attendance in school.

This town is tolerant. 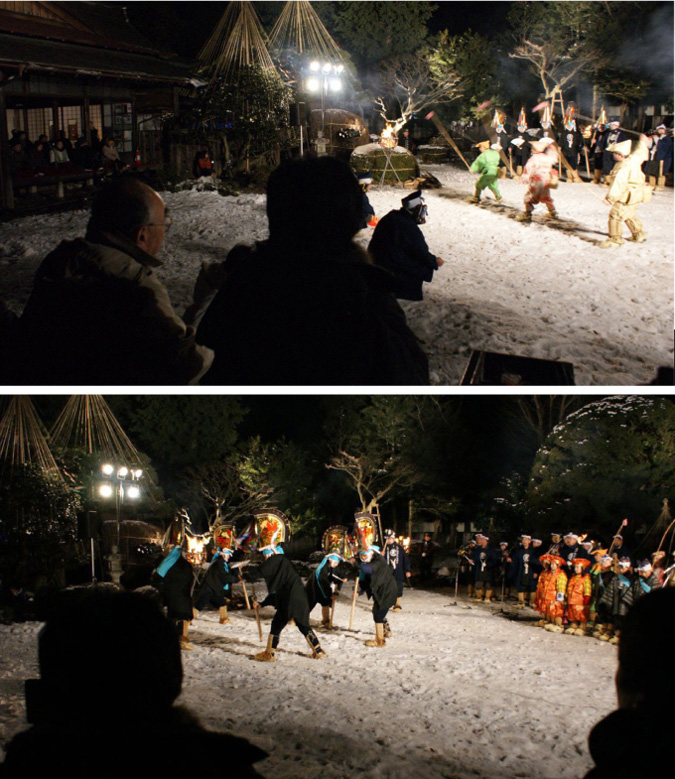