The high level of the Chinese community 's standard of living and, contrary to it, its closeness to outsiders seems to be the same even in a water village.

When I stepped into Sengarang, I felt as if I came to town rather than village.

The first surprise was a concrete pier. At a glance, it looked like a normal road, but it was a bridge that concrete pillars driven into the water supported. To be able to properly develop the infrastructure is the power of the community.

Walking for a long time from the entrance on the shore, the road crossed other road from another entrance and shops were settled around the crossing. Would it be a prejudice against a water village that I was deeply impressed by the fact that the shopping area was in such a place? The block where many buildings were built was like a corner of a small market.

In the middle of the road, there was a shared terrace covered with a roof (photo on the left at 5th row). Several pairs of old men played mah - jong there. It seemed to me to be a fine community scene, so, I took pictures from a distance, and when approaching and trying to take pictures again, one of them gestured with "x" greatly, having a terrible expression on his face. His eyes were full of discomfort and refusal to others.

Not only this old man but also everyone were cold. When I briefly bowed to a passing person, they ignored me or greeted with a cold nod. Well, it was obvious that I was accountable since I went in without permission, so I was full of sorrow. Compared with Kawal or Penyengat Island, I felt the difference among three ethnic groups.

That must be related to that they are immigrants, they live not on the land but on the water, the history of the Chinese inhabitants was confused by political turmoil of Indonesia and, first of all, they have pride in being Chinese descendants. Their residence protrude a wing wall near the eaves, similarly to the China town in Downtown Tanjung Pinang. They came to Sengarang around 1740. It seems to be one of the earliest examples of Chinese foreign immigrants, but even after a long time, they had proud that they had inherited their original residential form in southern China.

On the shore near the entrance of the water village, Taoism temple stood and incense sticks were burnt at all times. That must also be an important proof to legitimize their good lineage.

Road, shopping street, internet cafe, shared terrace, Taoist temple, and stabbing gaze. Sengarang is a very interesting place to show the fact that a water village becomes a urban village when the Chinese community creates it.

From Tanjun Pinang to Senggarang
15 minutes by ferry or charter boat from Tanjung Pinang Port.

Upload
2008.11 Photos in English version, and photos and text in Japanese version

Taoist temple in the Village of Senggarang 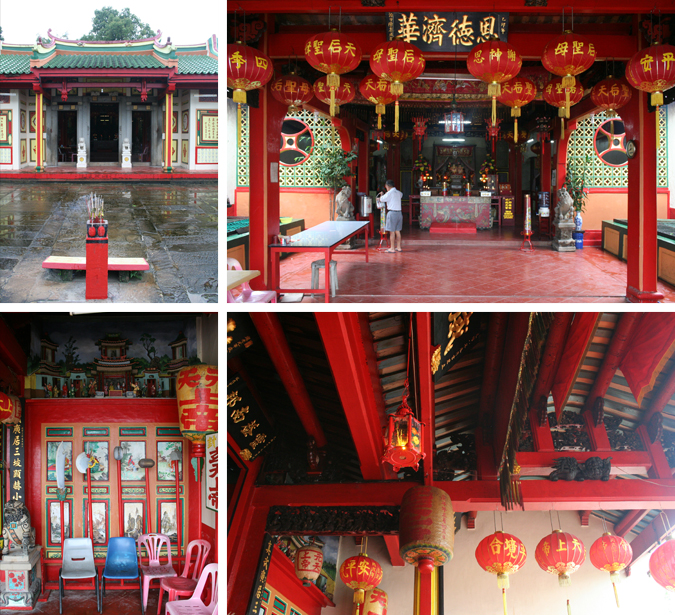