Unlike historical hotels that increase in value as time goes by, modern design hotels are often obliged to face a severe reality with the lapse of time.

Bentota Beach Hotel was completed in 1969, so it is 40 years old now. Due to the long period of time since the construction, it is natural that the hotel has been quite aged and cannot deny to be popularized compared with new luxury resort hotels. However, it still holds the status as the hotel representing Bentota. Even in the rainy season when I visited there, guest rooms were fully booked.

”Somewhere different” must be the reason why it has long been outlived and has enabled to differentiate from other hotels. The design that kept distance from the main stream has protected the hotel from the trend, which soon disappeared after having appeared. Recently, the new owner seems to have carried out large-scale renovation. Still the sense ”somewhat different” has not been lost and it must be the achievement of Bawa who designed the hotel.

The design of the hotel has no big gimmick or innovative planning. Abundant details is the source of ”somewhat different” sense.

For example, he used the fortress of masonry built by the Netherlands as the platform of the main building and decided the planning of the hotel according to its shape. This is a forerunner of development in consideration with preservation.

At the top of the stairs expanding from the surprisingly small carriage is the reception hall built on the platform and the whole of the ceiling is finished with a colorful folklore style textile. When encountering with the ceiling after turing around Sri Lanka, I remembered the ceiling paintings in the caves that I saw Dambulla Temple, Dowa Temple and Sigiriya. Tribute to folklore and caves may have been criticized at the time of construction because an approach to regionalism was regarded as retrograde.

Likewise, the guest wing, which exterior appearance with a protruding upper floor is bold, is said to have a motif of an old temple in Ratunapura, the Maha Saman temple, and a pond with an island planting big trees and a courtyard surrounded with a corridor remind of a monastery or colonial architecture. This is a historical quotation to modern architecture.

A guest room is slightly smaller than the average area of recent hotels, however it is comfortable. Pretty benches, which are installed on both indoor and outdoor side along zigzag shape of the wall facing the terrace, are a good example of “small comfortable place”, which appears repeatedly in many architectures designed by Bawa.

Even though only each small part is a little different, the accumulation of those changes the air of the whole. Such “weak strength” is the power of this architecture.

Bentota, which the Sri Lankan government started developing as a national resort in the 1960’s, is a place that shows the history of Sri Lankan style’s resort development. The Bentota Beach Hotel, which was build early, is endowed with a spacious site located at a sandbank protruding in the Indian Ocean where the outer sea borders on the west and the inner sea of the lagoon on the north.

Bentota station, which is just within a short walk, is a lovely architecture that Bawa created in 1967. The window with round edge reminds of British architects, Archigrams and James Stirling 's works of the 1960’s. The air of that time would reach to this place ?

The number of trains stopping at this station are decreasing now. The station, which was built for tourists in the time when development of Bentota began, seems to have finished its role and spend a gentle rest of life.

Transportation
Go to Bentota Station or Aluthmaga Staion where it takes 2 hours by train from Colombo, then 5 minutes walk to the Bentota Beach hotel.

Upload
2008.02 Photos in English version, and photos and text in Japanese version 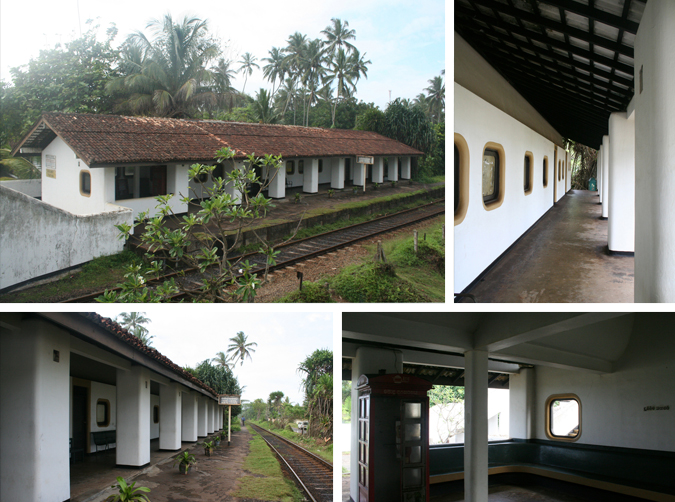