The Blue Water Hotel is located at the edge of the metropolitan Colombo, less than an hour from downtown Colombo to the south. It seems to be one of the most popular hotels in Sri Lanka now.

When passing through a high fence, a landscape isolated from the outside world appears. On a large grass, palm trees are planted in a lattice-like form, between which a long corridor passes along ponds on both sides. The calrity of the plain garden with this extent is refreshing.

As a guest goes through the corridor, the main building of the hotel and the guest room wings stand orthogonally. Beyond the 3-story horizontal buildings, which continue to the edge of the site, is a garden connecting to the beach and the air of the garden is different from that on the main road side. The shape of the pool becomes amorphous, and palm trees are disposed at random. Whether it is intentional or not, the shape of trees is lightly swinging. Moreover, floating islands of palm tree and pergolas with staircase-form are added, but since the garden on the beach side is neither complicated unnecessarily nor designed exotically, it is animated but moderate and refined.

Flat land without strong features has been reborn as a cozy landscape by attractive garden designing way. Even so, it was fact that I felt somewhat unsatisfactory.

Moreover, it has no movement in the height direction since most of the public spaces are on the same horizontal level. The plan of the architecture is linear and the same elements only repeat. That looks more monotonous. If evaluated favorably, it can be said that the architecture was designed so that the landscape of the garden would stands out.

Well, now let's run for about an hour from Colombo to the opposite direction. Beyond downtown Negombo, beach resorts lined the coast. One of them is the Beach Negombo facing the wide beach and it is also a work of Bawa. Originally it had been named Royal Oceanic Hotel but it was renamed after a large scale renovation.

Similarly to the Kandalama Hotel, it is an ordinary, box-shaped architecture with concrete column and beams, and if the design had not gone well, it could have been an unfriendly hotel. Besides, it stands on a flat ground, so there is no special charcter of the place.

In reality, by accumulation of slight operations such as the reception that is raised on the second floor, the public spaces that is expanded on two floors with a movement in the height direction, and insertion of a pool with floating islands of trees that is arranged in a void, a varied space appears unexpectedly. As a guest moves, the height of the line of sight changes, and the appearance of the view and the space is also changing. Though the space is not very wide, a guest encounters with various scenes. That also attracts the spaciousness into the hotel.

I did not know on which parts was the original in the exterior appearance and the interior of a guest room finished with a sophisticated Asian taste, and, while the space was comfortable. it seemed to accommodated itself to the trend of the present time. Nonetheless, the design technique by Bawa, which appears here and there and maintains the air of that time, brings a air with a little distance from similar Asian taste hotels.

Upload
2008.02 Photos in English version, and photos and text in Japanese version 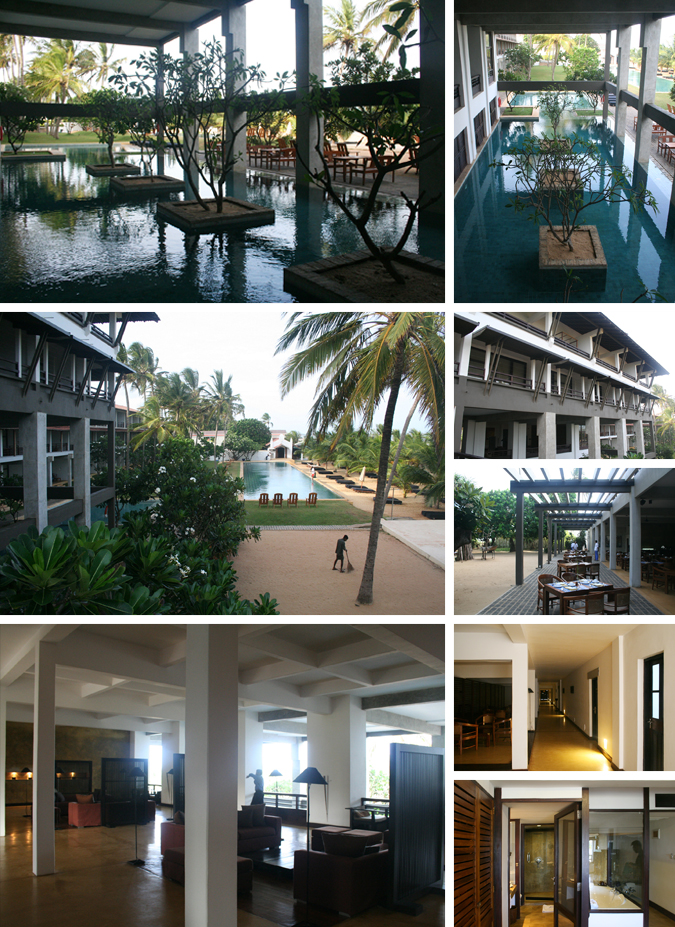