Lukang was one of three mayor ports during the Ching Dynasty. Other were Tainan and Wanhua in Taipei. Being backed up by the prosperity of the trading between Continental China, this town produced famous literary men or calligrapher, and the 4th period of Taiwan Chinese culture is called as Lukang Period. Now, the famous family's residence with neo-baroque style, which was constructed in the time under the rule of Japan, is opened as Lukang folklore museum. In the museum, they can see not Chinese civilization but the high-level Chinese culture which had been succeeded in Lukang.

The prosperity of Lukang had been decaying after that the main transportation route had been constructed in the inland in the time under the rule of Japan. Now, Lukang is a small town with a population of 80,000. Thanks to that the development was not done very much, the town is abundant of accumulation of historical attraction.

The old townscape district designated as a protected area of traditional townscape, local townhouses built of brick, narrow streets and lanes bent and turned due to preventing the strong wind in the winter, many historical temples dotting the town, the neo-occidental style townscape on the main street constructed in the time of the end of the Ching destiny to the time under the rule of Japan, and various famous products and traditional industrial arts such as a meat bun, Chinese confectionery, Karasumi (smoke striped mullet spawn), folding fan, lantern and religious articles. In the town with scale proper to walking, they encounter one after another to various apparatus for making walk pleasantly .

Although, in the Taiwanese towns, the lanes and temples are common elements, the density and level in Lukang are notable but those are not too maintained and are backed up by the usual life of usual locals. It is an attraction of Lukang. During circulating, I felt a deja-vu with deer feeling or relieved atmosphere many times. It was similar to not tourist resorts flourished for a long time but the once atmosphere of tourist resorts in Japan.

Since the attractive points in the town are spattered on the network of narrow streets, they have to get off the car and walk around, so, the town is still not involved in the motorization. But, the existence of huge parking lots for tourism in the backside area of the main road suggests the possibility non grata in the near future.

And the actual state that high-rise apartments stand between the low-rise townscape is a common scenery which they can see anywhere in Taiwan, even in the small local cities. But Lukang is an special town which has a possibility of growth not by contemporary development but by townscape protection which inducts tourism.

I hope that Lukang doesn't repeat the failure of Japanese small local towns where municipalities corresponded to motorization and easing of the restrictions, and, as the result, historical townscapes were destroyed, towns spread to the suburb and the downtown lost the power not only in commerce or business but also as tourist attraction.

It is still not late for Lukang.

1. Old townscape district
It was a district by immigrant from Continental China. Now. as the result of the protection program for the townscape, it changes in the shop for a tourist and becomes an big tourist spot.

2. Nine turn lane
Compared with the old townscape district, they can see an atmosphere of the usual life by locals here.

3. Breast-touching lane
It is a narrowest street in Lukang. Besides, the distance of the lane is also very long and its naming is characteristic. Therefore, many tourists visit here. I also encountered this name in Makugn in Penghu Island, so, the name may be used usually in Taiwan.

Upload
2007.02 Photos and text in English version and Japanese version 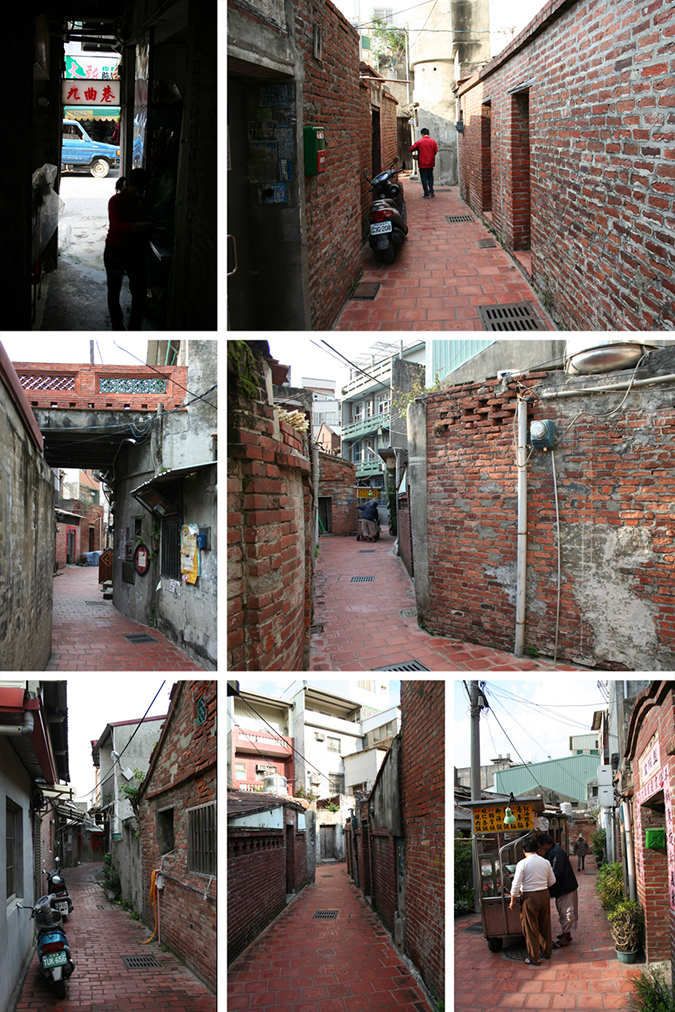