The third is the Professional Building designed by Morgan, Walls & Clements in 1932. The upper part of a T character type plan, which was put on the rectangular lower part, is characteristic.

The facade on the main street side is a reverse T character type and it towers high right up to the side of the road. It is quite symbolic because of a stoic fenestration like rationalism architecture.

The top part of the tower like the spiral curls of a Buddha statue, the sculpture like a phoenix on the front entrance and the lattice which combined arabesque pattern and an arrow are Art Deco.

It was the time of the Great Depression when three skyscrapers were completed. Though Phoenix was a small town those days, the Professional Building was filled with a bank and medical facilities, the Title and Trust Building is also filled with a lawyer's office and a bank and even the Lurhs Tower with vacant rooms could continued to pay the loan to a bank. The design which was differentiated might have the power of overcoming the smallness of a town and a depression.

The more formidable situation than the Great Depression was the hollowing out of the city center which advanced in 1970's and 1980's. Therefore, three buildings had been run down. The tide turned after the 21st century began.

By opening of LRT and construction of the large-sized offices and condominiums, the tendency of people to return to downtown Phoenix grew stronger and the influence also extended to three skyscrapers. The Title and Trust Building was renovated into an upscale condominium, the Lurhs Tower is rumored to be planned to high-class resort hotel and the Professional Building was renovated into a hotel. Three buildings are well worth the restoration.

In contrast with the skyscrapers, a small L character type architecture which surrounds a front garden among buildings is the Winters Building designed by William Peper, Morgan, Walls & Clements in 1931.

Even if the pattern of a black granite related to American Indian's vase and the white relief of the Maya Style produce the air of Pueblo Deco, I felt the stylishness of Art Deco most among the architectures in Phoenix. 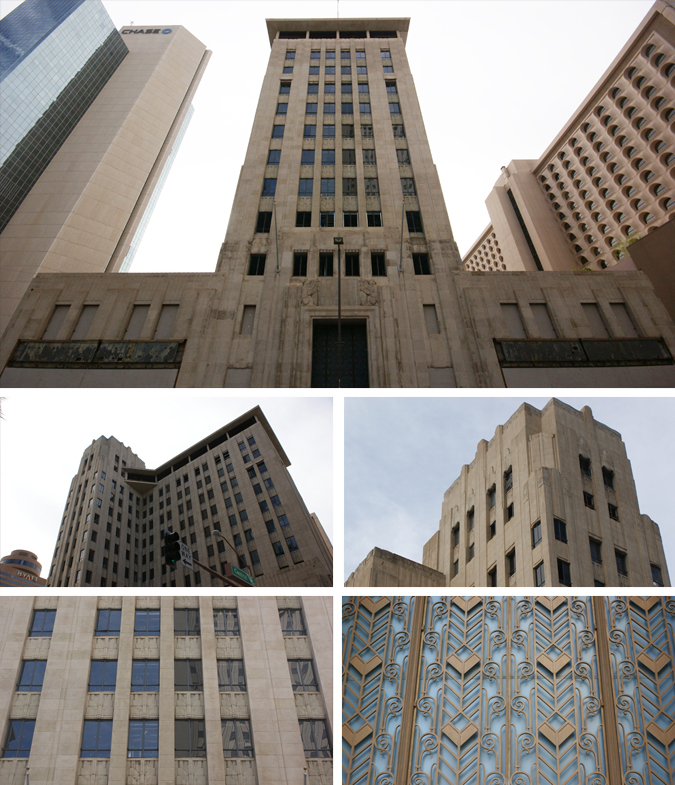