A house which locates in the area crowded with houses in Tokyo. Due to the lack of the budget it was impossible to construct the 3 stories house as the neighbors.

In place of it, the ceiling height of the 2nd floor was established higher than usual house. It was a design for evading that they see that this house is hollow from neighborhood houses.
The position of the exterior wall in the road side was also put in that of the neighborhood. Due to the car parking, the first floor was set back and the second floor which locates at more confortable level was overhanged.

As for the interior, the house was designed so that the distance would be emphasized excessively in the small space, we intended to clarify the character of the house and to get the extent in the sense.

From the entrance to the living room at the second floor, a long approach was establised via the backyard garden, so the visitor feels this house bigger.

The second floor is an opened space with the big windows on the south and north side and 3.3m height。

From the living room, they can see the sky of both side, and the backyard garden at the first floor through the opening under the floating floor. Those are also device for making feel this house bigger.

The ceiling of the living room reflects the sight. The exisence of the ceiling disappear and the height is seen more highly. 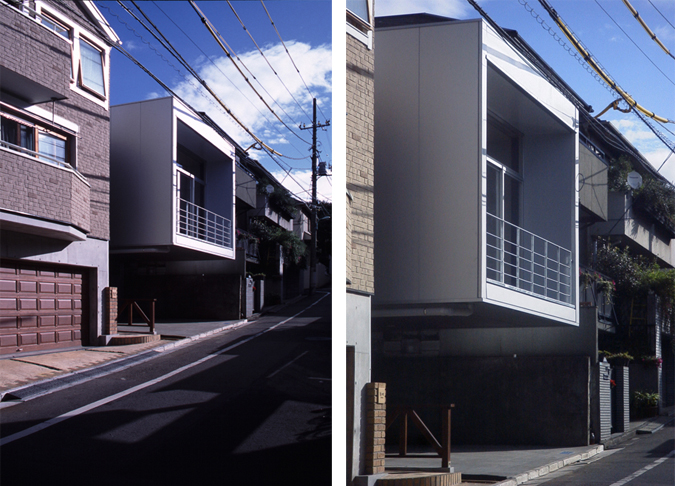 The exterior appearance. The surrounding houses have three floors, but by setting the ceiling height on the second floor to 3.3 m, it becomes a tall two-story building and does not give the impression of being depressed. 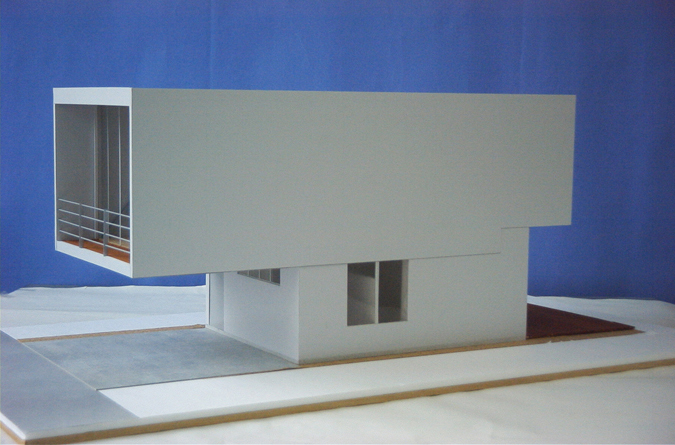 The photo of the model. The second floor, which has good living conditions, is larger than the first floor, and the difference between both floors becomesthe parking lot on the first floor. 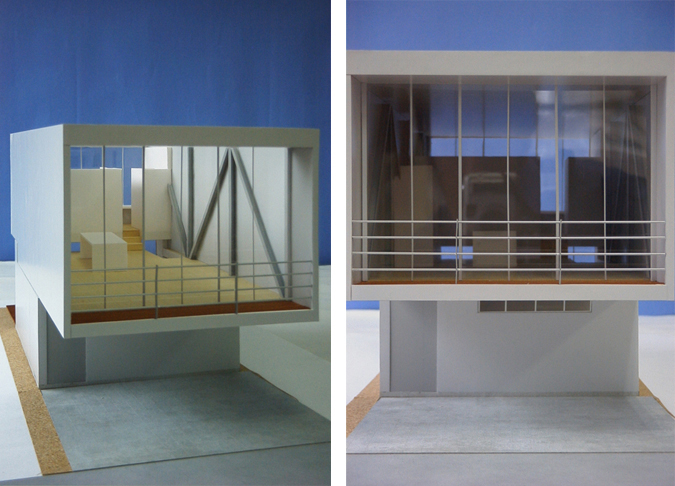 The photo of the model. The inside of the projecting part on the second floor is a living room with high ceiling. 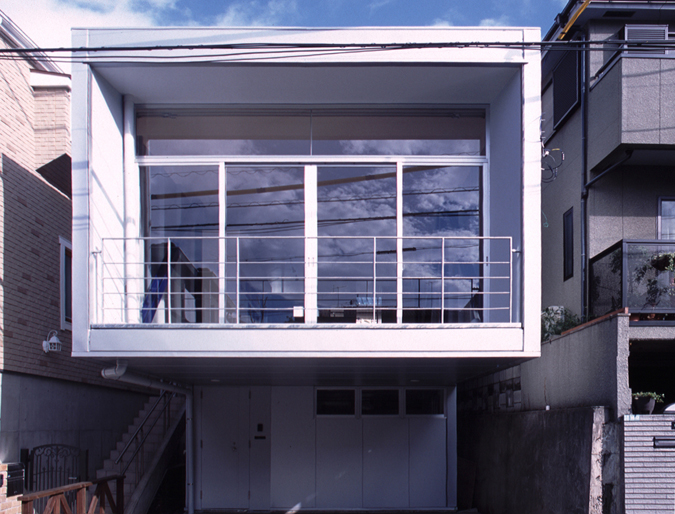 See the exterior appearance. The second floor overhangs 5m. Due to the client's request to place two cars on a site with a narrow frontage, the second floor projects with a steel frame without making a wall. 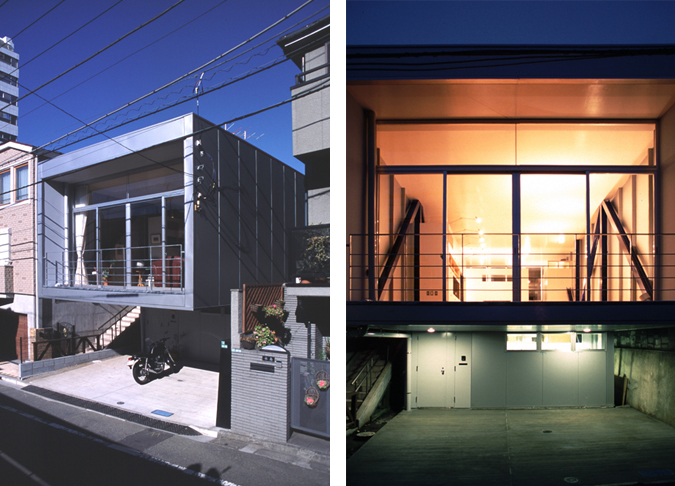 The exterior appearance. The 2nd floor projects to the road side, and there is a terrace in front of it, so no one can see the inside of the second floor from a walker. 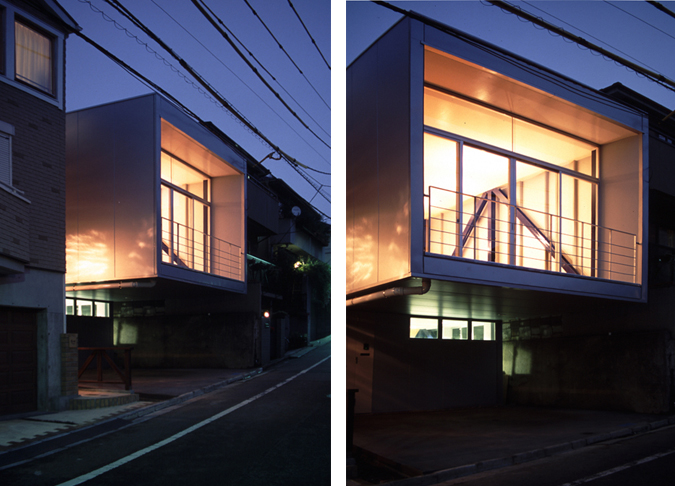 The evening view of the exterior appearance. The second floor overhangs, and the first floor below it is a parking lot. The exterior wall is a galvanized steel plate panel filled with heat insulating material. 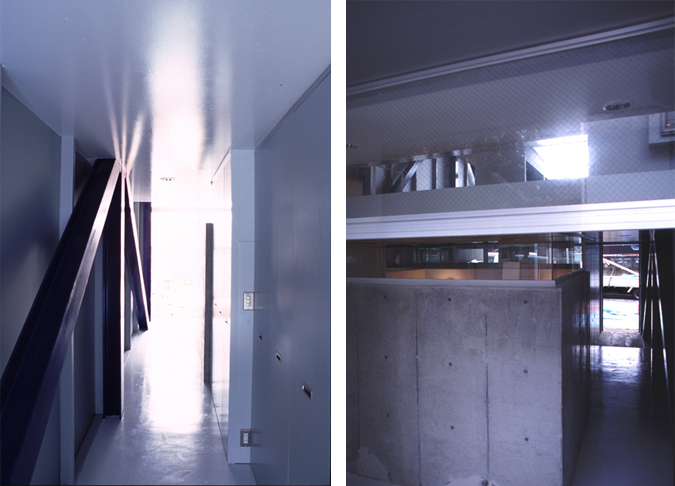 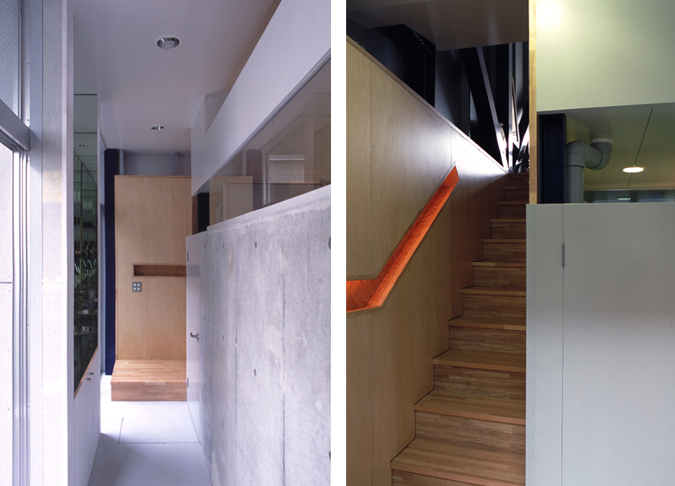 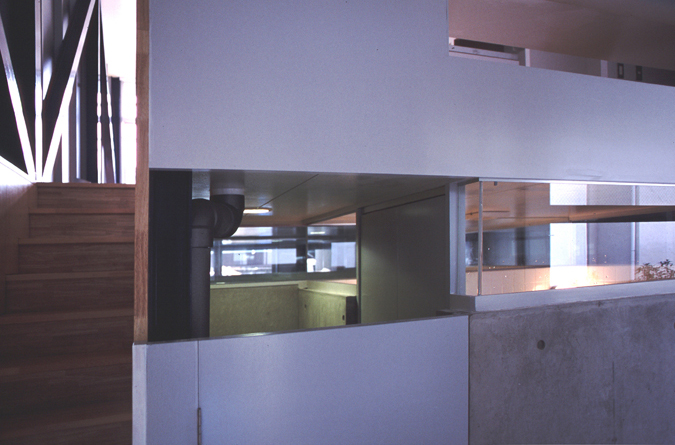 See the second floor from the stairs. Through the glass transom windows in each room on the first floor, the line of sight passes to the road side, and light enters in the central part of the first floor where the lighting conditions are poor. 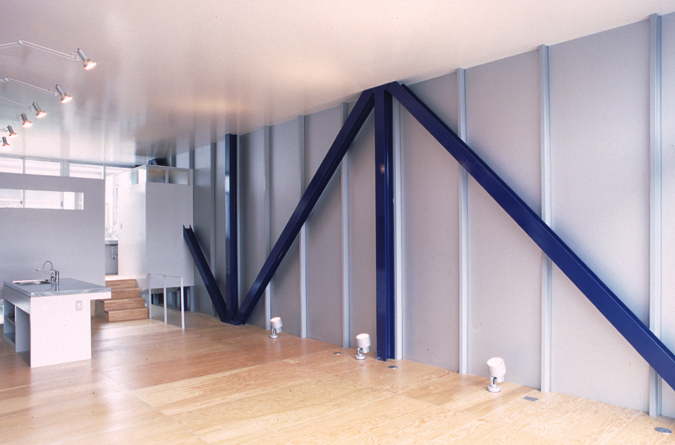 See the living room on the 2nd floor. The interior is finished with metal panels filled with insulation used as the exterior walls. 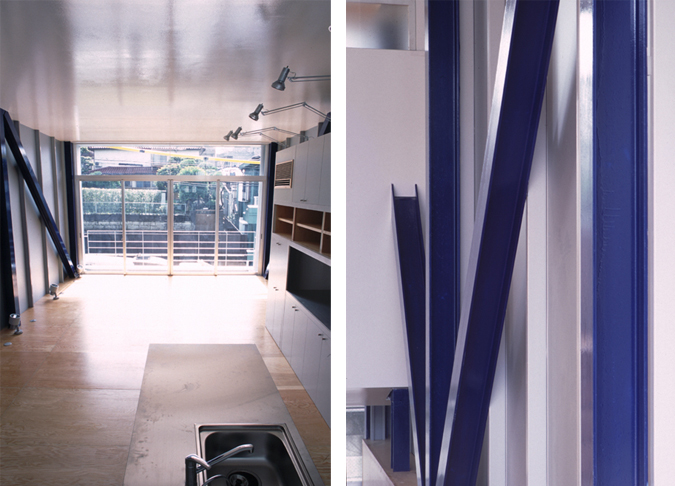 See the living room on the second floor. The ceiling height is 3.3m. There are large windows in the south and north, and they can see the sky from the room in two directions. 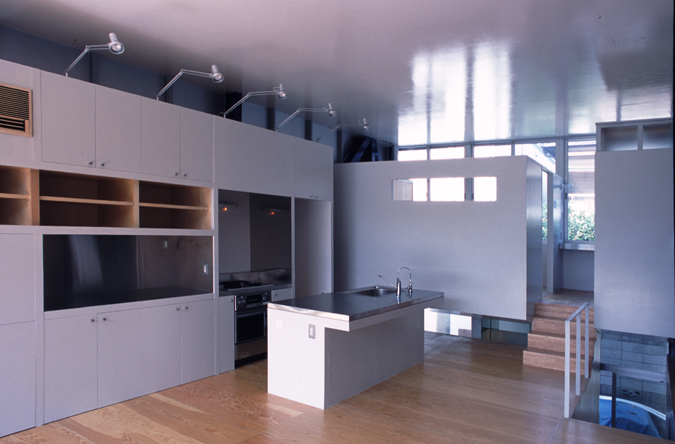 See the Living room on the second floor. Since windows are disposed adjusting to the flow of the north-south wind in the summer, and they can live cool with the natural wind. The scenery is reflected on the glossy ceiling, and the ceiling feels even higher.