The house for the conductor of the art gallery. The interior of the house is finished in white in consideration with exhibiting art.

This house is located in the residential area with high density of houses. All sides of the site are enclosed by houses and the small alley connects with the street.
Before the house was rebuilt, the windows of neither this house nor the surrounding houses were closed with the curtain or the shutter because the distance between houses were very short.
The starting point of the design of the house was to find out what kind of house is comfortable in the site difficult to open to all sides.

44 : 63
44 means the maximum building area by the law. While, 63 means the base area of the max volume of two stories that is defined by the oblique line control based on the construction regulation and the minimum clearance distance between the building and the property line based on the civil law and the construction way.
If the maximum building area raises directly, the windows have to install on the outside wall of all sides. The windows of the house have to be closed by the curtain or the shutterto protect the privacy, therefore the introduction of light and wind is limited.
In this house, the maximum volume of two stories with base area of 63 square meters raises. The gap of 19 square meters between the base area and the maximum building area becomes three courtyards. All windows are disposed facing to the courtyards, and the courtyards would be felt as a continuous space.

Courtyard and the introduction of sky
The courtyards are considered as a room. Those supply the light and the wind to this house and, on the ground floor, are utilized as attached rooms in the summer.
The courtyards have the size of more than 1.6 meters in the short side and more than 2.6 meters in the long side, and those are longer than the usual distance from the windows to the outside wall of the neighboring house in the high density area. Therefore, in this house, even the ground floor gets five times or more necessary windows size for the daylight that is provided by regulation. Unlike the house with windows on the outside wall, the windows in this house are always open and the light and the wind can be taken at maximum without consideration to the privacy since the glance from the neighboring house is considerably shut out.
The courtyards are not room without ceiling but a room with the ceiling finished with sky. In the house of the high density area, it is rare to see the sky from the interior, while, in this house, it is possible to see the real image of sky according to the size of courtyard as well as the virtual image of sky reflected on the window glass. The sky is amplified and overlaps to the interior ceiling. The floor and the ceiling of the interior are finished with high-gloss paint that also reflects the sky and the scenery. The seeing of sky also brings the spacious sense in the space, and the space with high receptivity for the change of the season and the time appears.

Open and close
The house without the window on the outside wall might be defined as a closed architecture. Actually, as the residents of the surrounding houses recognized that their privacy was not interfered by the newly constructed house, they came to open their windows little by little. To the interior of this house, the sign of the outside like people, the street or the nature is brought through the opened windows in the daytime in contrast with the closed impression.
Through such change, this house and the surrounding houses that were closed are opening to the outside. Closing the architecture on the form is not the same as the real closing and there is a case that opening is induced even if the appearance seems closed. At designing the house, I expected that this block goes opening gradually through the medium of the newly constructed house with closed impression.

Consideration to the sustainability
As for the heat loss from the windows, this house is not unfavorable compared with other houses. Then, all windows have double glass in consideration with the thermal insulation.
The exterior wall and the roof slab are also covered with the high-performance external thermal insulation.
In the summer, the windows on both sides are easy to open entirely. Therefore, the natural wind goes through the interior of the house.
While, in the winter, according to the windows with depth, the sunlight pours into the room. And, the heat from the sunlight is charged in the concrete slab and wall according to the principle of passive solar system.
According to the effect of the window that gets in the interior, the natural light is supplied from the morning to the evening and they can live without the artificial light in the daytime. 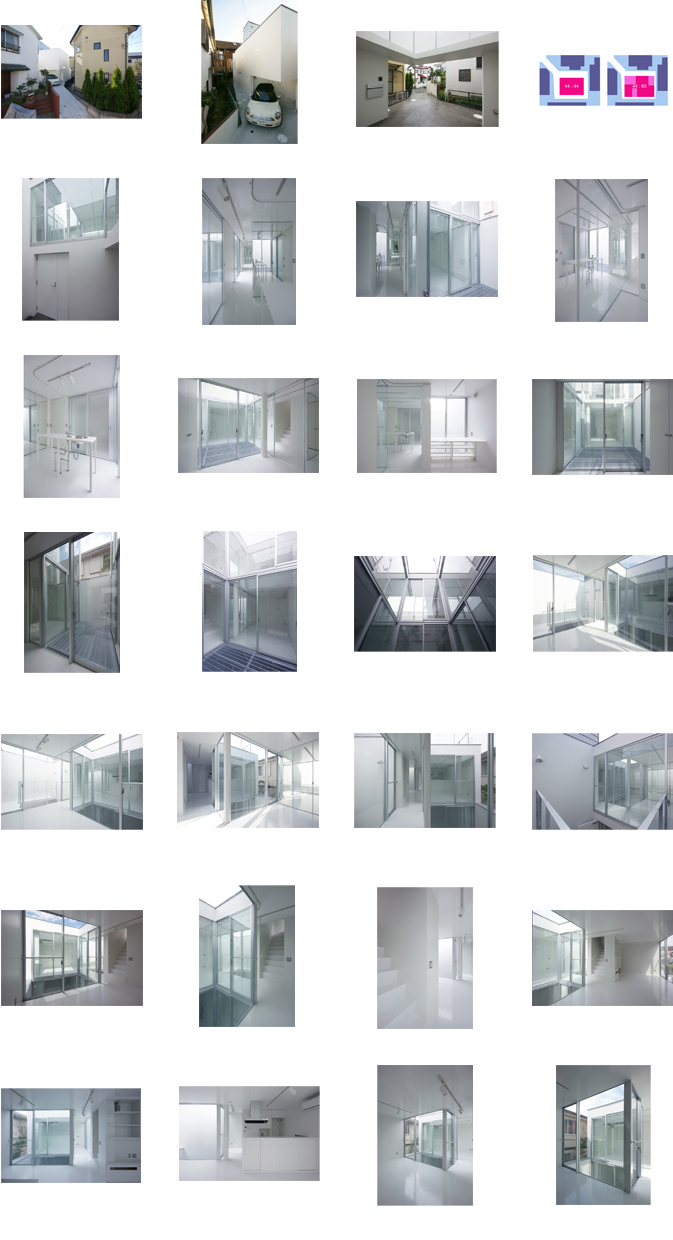