A fire station and disaster prevention center built on Ibuki-jima Island, a remote island in the Seto Inner Sea of Japan.
It consists of a fire garage, a waiting room/evacuation room where firefighters stand by and serve as an evacuation place in the event of a disaster, and a fire lookout tower/observatory on the roof.

When the new architecture is located in a village that retains the traditional scenery in the Seto Inner Sea, we considered that it will not stand out from the scenery and will blend in with it.
The building is designed as if a part of the landscape of a large open space, which was once the schoolyard of an elementary school, was lifted and floated in the air. The roof as a fire lookout place/observatory is finished with artificial turf with natural turf specifications, and if looked down from a high place in the village, it continues to the scattered fields and greenery and blends into the scenery. The height of the building is set inside the skyline of the houses in the village on the slope, and when viewed from below, it disappears behind the houses and its existence cannot be seen. The exterior wall is finished with a cedar board painted with weather-resistant paint, which is a material often used on the island. Therefore, at the height of the pedestrian's line of sight from a close distance, locals are not strongly aware of its existence because it is covered with familiar materials.

Around the building, we arranged spaces to accept the activities of various people who existed around the site. On the island where the signs of people are gradually decreasing due to the declining and aging of residents, even the manifestation of a small sign of people must cheer up the island. The fire lookout place/observatory is designed so that visitors and locals can take a nap or have a picnic on the lawn with a wonderful view of the island. Under the wide eaves on the south and west sides are a shaded terrace where the aged people can rest after petanque and a water place where children can play in the water after school. The large window shows the firefighting meeting to locals living in the upper part of the village and becomes tangible the activities of the fire brigade. The fire garage has a window about 4m high. At the previous fire department, four fire engines, including the precious three-wheeled motor vehicle maintained only on this island, were hidden behind the shutters. We positioned it as a tourism resource and made it visible to visitors from outside the island. Signs of things also imply the existence of the person behind them. 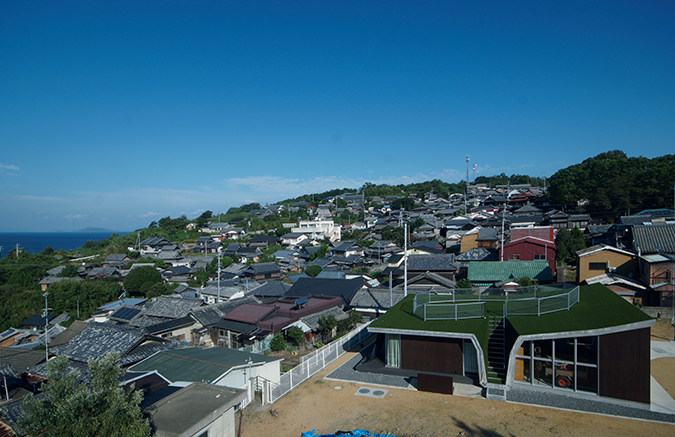 See the fire station and the scenery of the village. Its design like a landscape blends in with the scattered fields and greenery. 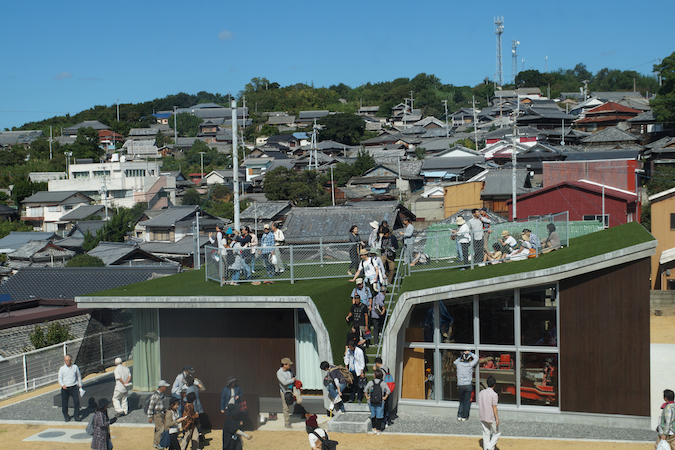 See the exterior appearance on the south side. Under the curved roof is the waiting room on the left side and the fire garage on the right side. Through the window of the fire garage, visitors can see the three-wheeled fire engines as a tourist resource. 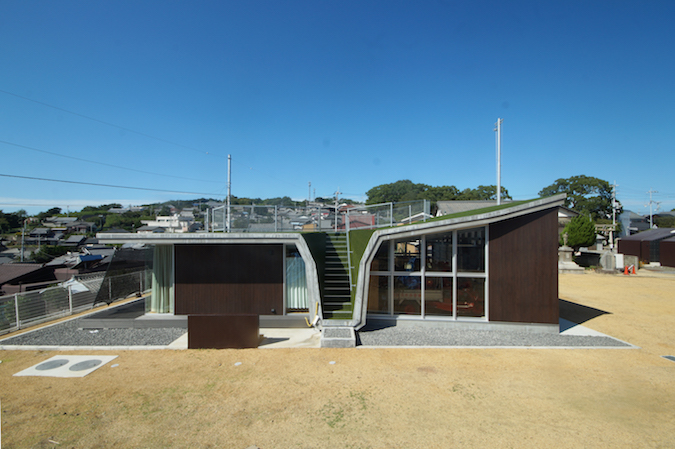 The roof is finished with artificial turf with natural turf specifications, and the ground looks like it is floating in the air. An island-shaped railing surrounds the center of the roof, allowing visitors to take a nap or have a picnic. 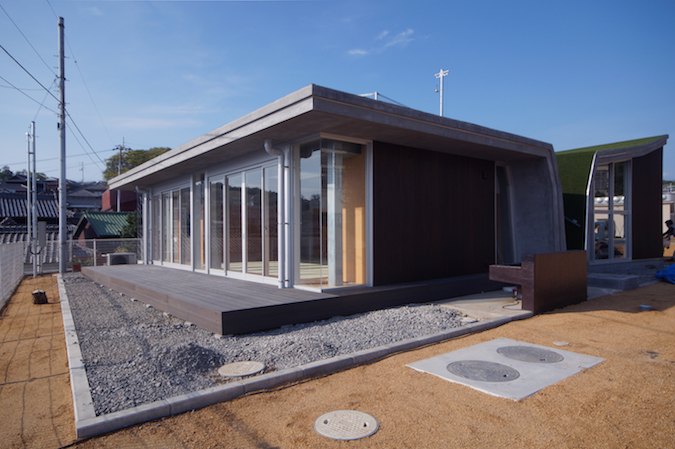 See the building from the southwest. The waiting room is beyond the glass window. At the time of the firefighting gathering, locals living in the upper part of the village can see signs of activity. A roof avoids the sun and rain and, under the wide eaves on the south and west sides are a shaded terrace where the aged people can rest after petanque and a water place where children can play in the water after school. 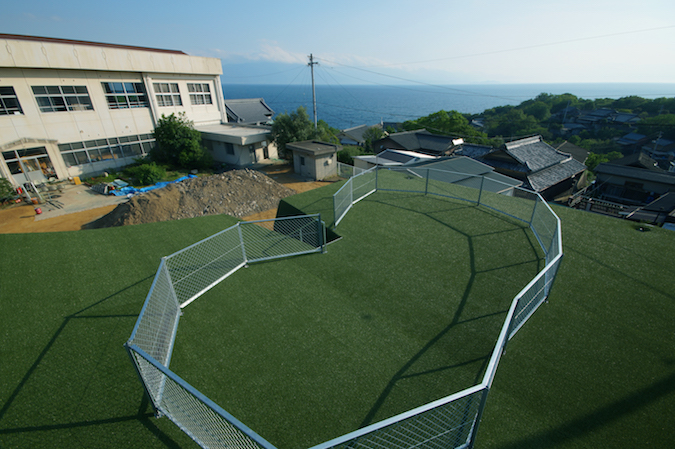 The roof, which functions as an observatory and a fire lookout place, is protected with asphalt waterproofing and concrete, and is covered with artificial turf which has a durability of nearly 20 years with respect to fading and deterioration due to ultraviolet rays. 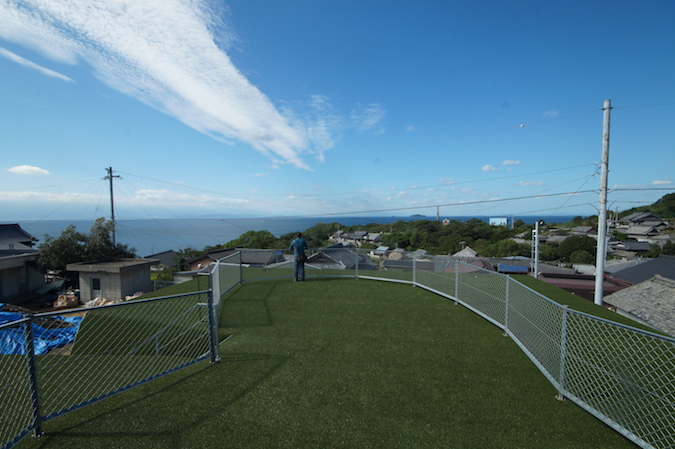 See the fire lookout place/observatory where visitors can see the scenery of the village and the sea. 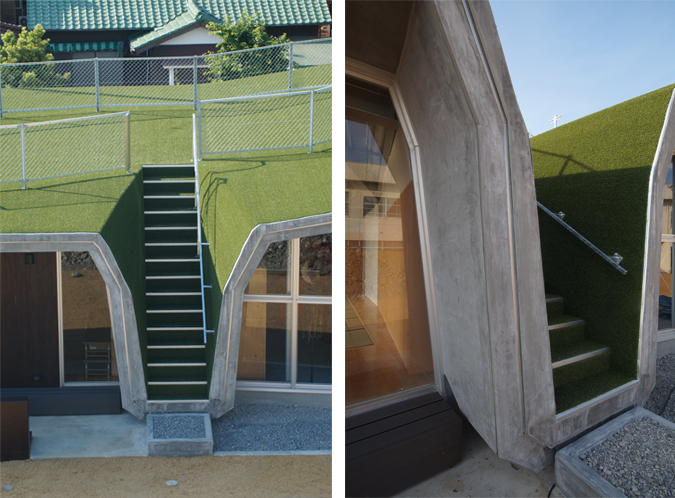 See the stairs going up to the roof. By building it as opening to the outside, we attempted to attract people. 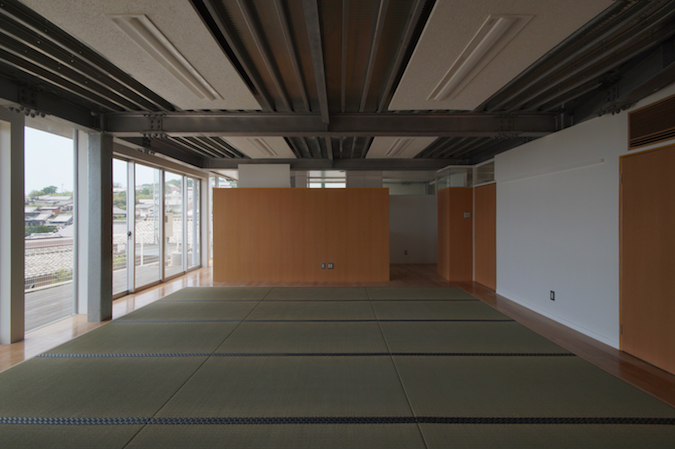 See the waiting room. It functions as an evacuation room in the event of a disaster. For columns, beams, and ceilings, structural materials are used as they are as designs. 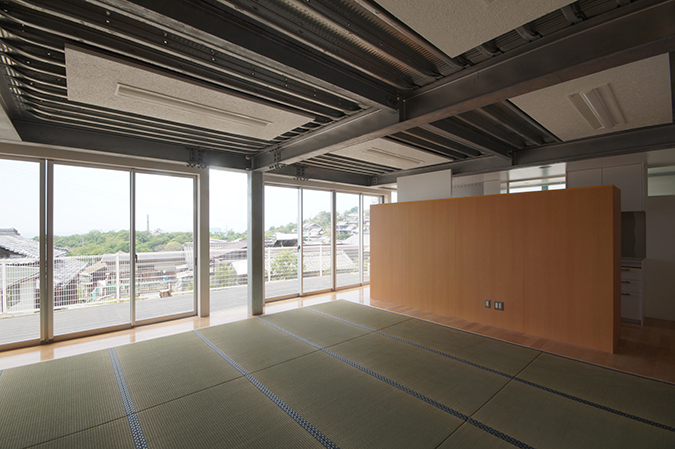 See the scenery of the village from the window of the waiting room. At the same time, residents can see the activities held in the station like the firefighting gathering.。 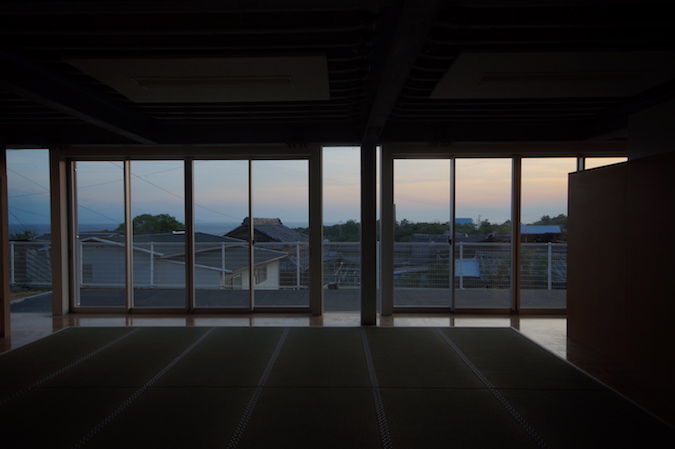 See the scenery of the village from the waiting room in the evening. 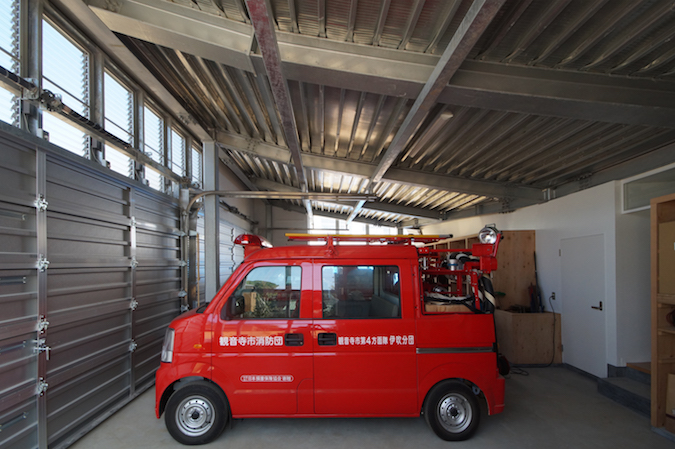 See the fire garage. The structures are used as a design element. Large windows were installed so that indoor activities could be carried out without artificial lighting during the daytime in normal times and the time of disasters. 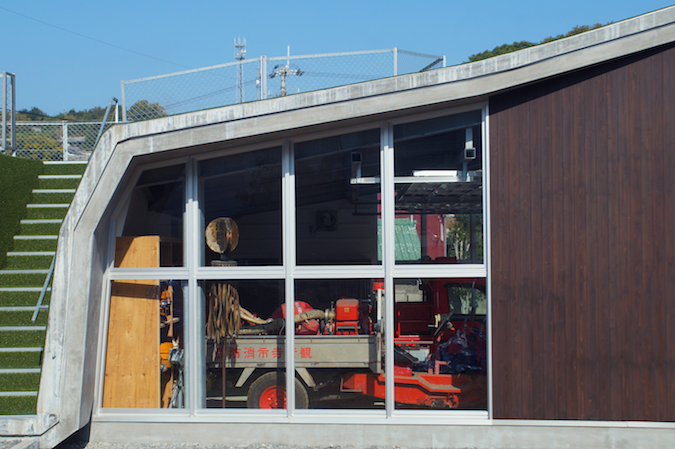 See the fire garage from the outside. Through the large window, visitor can see four fire engines including the three-wheeled motor vehicle, as a tourist resource of the island. 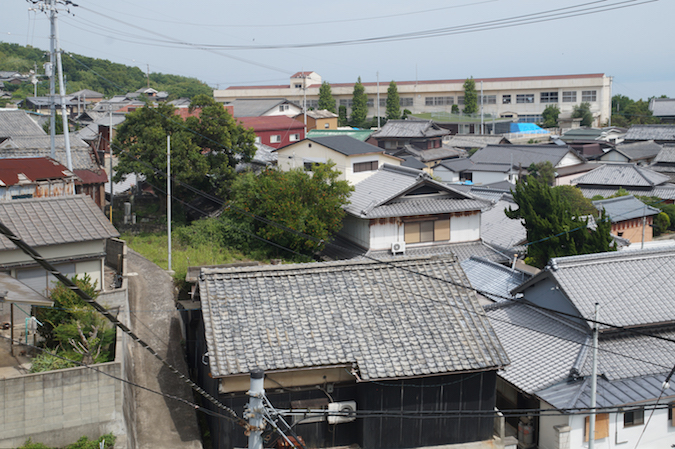