In the Buddhism country where the belief is critical, it is a barometer of the belief to always decorate it richly and keep renovating it as long as money continues rather than to maintain it like old times based on the historical value as an architecture. The more the alive of an buddhist temple it is in people, the more being updated is an inevitable consequence, and this Temple of the Sacred Tooth Relic is at the highest point between those Buddhist temples.

It might be interest in the Temple of the Sacred Tooth Relic to read such belief of people that had been accumulated on the architecture for a long time. Still, when seeing the photograph of the Temple painted on pink in the 1980's, I am puzzled as to the belief.

The wonderful sculpture and the decoration is the essence of Sri Lankan traditional craft and the motif of Sri Lankan culture. Especially, the carving and painting of the main shrine is so gorgeous as Momoyama epic culture in Japan though those colors fade away. The density of decoration is obviously different from other buddhist temples of Sri Lanka. I guessed that it was because the main shrine was built as a miniature indoor shrine in the main construction for protecting the stupa that stored the Buddha canine tooth.

Kingdom of Kandy continued until the beginning of the 19th century though the foreign country extended power in Sri Lanka. Time when this gorgeous main shrine was founded was a period when the long warlike age subsided. It is interesting that the situation seemed to be common to Momoyama epic when the similar architecture appeared.

On the north side of the temple is the king assembly house Mangul Maduwa. The style of architecture that the the pillars of two rows are located in the perimeter zone is the same as Embekke Devale, but the area and height are far larger than Embekke Devale. The large size may be a proof that it was king facilities, and the silhouette of the roof gives off a grace appropriate to the royalty .

However, when entering inside, I felt no comfortable impression for the space. Compared with Embekke Devale, only the monotonous pillars repeat and the interval and height of pillars exceed human scale. Moreover, since the space is open to all directions, it is lack of the atmosphere that relaxes the people. It may also be what the architecture that showed king authority intended.

Transportation
Within the walking distance of downtown Kandy.

Mangul Maduwa of Temple of the Sacred Tooth Relic 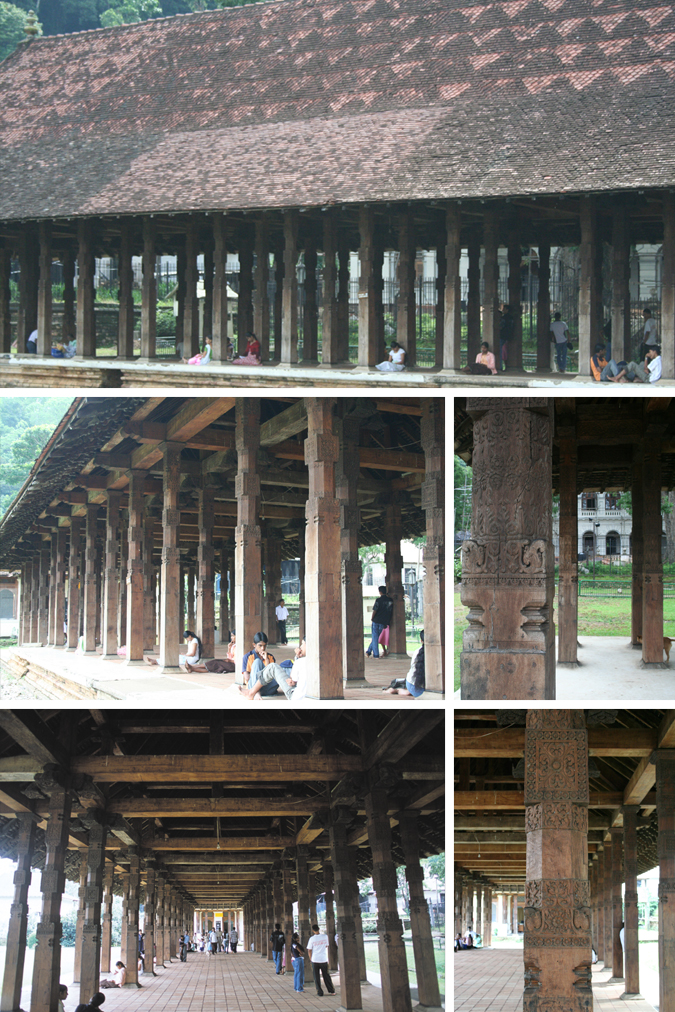