Now, let's explore the housing situation of such Phoenix.

The first is Paradise Valley which makes it into to best 10. There is a high-end residential area where the residences designed by Frank Lloyd Wright are located.

In Phoenix belonging to a desert climate region, only rocky mountains which exposed the surface stand up from a plain. On the slope, big residences are built here and there. When I looked up from the foot, I was impressed by residents who lived in such insipid place. The sunlight is severer than the foot and it is difficult to get water unless they install a storage pump by themselves.

However, "you'll never know unless you try". I went up an unbelievably steep hill like a water slider. When I turned around from the hill, I found that beautiful green scenery spread out at the foot.

Paradise Valley was a residential area which rich people looked down from the top rather than the common people looked up from the foot. Only people who spare financial resources can obtain by money a superb view of the oasis in the desert.

When I explored Phoenix on Google Earth, I discovered the Scottsdale Ranch, It is a residential block with a man-made lake.

The lake suddenly appears in the city. Into the land of a peninsula form projected to the lake, streets branche off and residences stand in a row. Since a residences may stand between a street and the lake, the lake is not visible from a street, or rather the land is packed with houses because the majority of site are taken by the lake.

I was looking down the lake from a bridge when a resident's boat approached and passed through. Phoenix is a desert town which doesn't almost hold the waterside, so the large water surface, which they use freely, has to be the symbol of the resident's status . The captain whose boat is full of the friends shook the hand to me as hello a little proudly and a commoner on the bridge received his sign thankfully.

In 1984, the Scottsdale Ranch was developed. About one seventh of the development area of 4.5 square kilometer is the residential area surrounding the lake. In addition to the lake with 160,000 square meter where a bass and a catfish are released, a park with 250,000 square meter is located at the center of the area. What a comfortable residential environment ! Since the present population is 4000 persons, the population density is 884 persons per square kilometer. So, as a high-end residential area, the population density is quite higher than Paradise Valley. However, thanks to the environmental design and the atmosphere formed by the spaciousness and the well-cared-for garden of each residence, it keeps up the good image of the high-end residential area even today, nearly 30 years after the completion.

Even so, what is the residents' income source in Paradise Valley or the Scottsdale Ranch ? What should they do to live here ? Although I don't necessarily want to live here, I envy the income.

The last is the Sun City. It is an aged people community largest in the United States.

The developer Del Webb started to develop there in 1960. It is a community where only people aged 55 and over can live and 60,000 people live now for 66.5 square kilometer including Sun CIty West developed afterwards. A residence was supplied at a reasonable price and aged people can spend their old age at a place warm in the winter.

When I circulated, I noticed that there are no many detached houses. The majority is a continuous terrace house or a minimum size's dwelling unit combining 2 homes in one house. Streets are bordered with trees and each house has a lawn to its surroundings, but, unlike an ordinary residential area in the United States, I could never see a house with a beautifully-cared-for garden in their own way. Isn't selfish change allowed since their rest of life is limited and a house has to be transferred to others ?

916 persons per square kilometer of the population density is not very different from that of the Scottsdale Ranch. However, though it was spacious, I felt as if I had walked around the dreary warehouse district due to a standardized dwelling units with monotonous surroundings. The community introduces an electric vehicle and is fully equipped with golf courses and sport facilities which they can use by several 100 dollars annual membership. That suggests that the community is an ideal town which takes the environment and health into consideration and offers a life possible to spend fully by an ordinary pension. However, it seemed to me that unfastidiousness in a house brings an ambient of lacking something.

Closer to Sun CIty in northwest from the downtown, more insipid an atmosphere of residence and townscape become. It is quite different from that of the eastern part like Paradise Valley and Scottsdale Ranch. It was neither necessarily dangerous nor desolated, but green decreases and desert is not changed in green artificially. A freight yard increases and the expression of buildings becomes pragmatic.

The property value of a place was closely reflected in the scenery of a house. 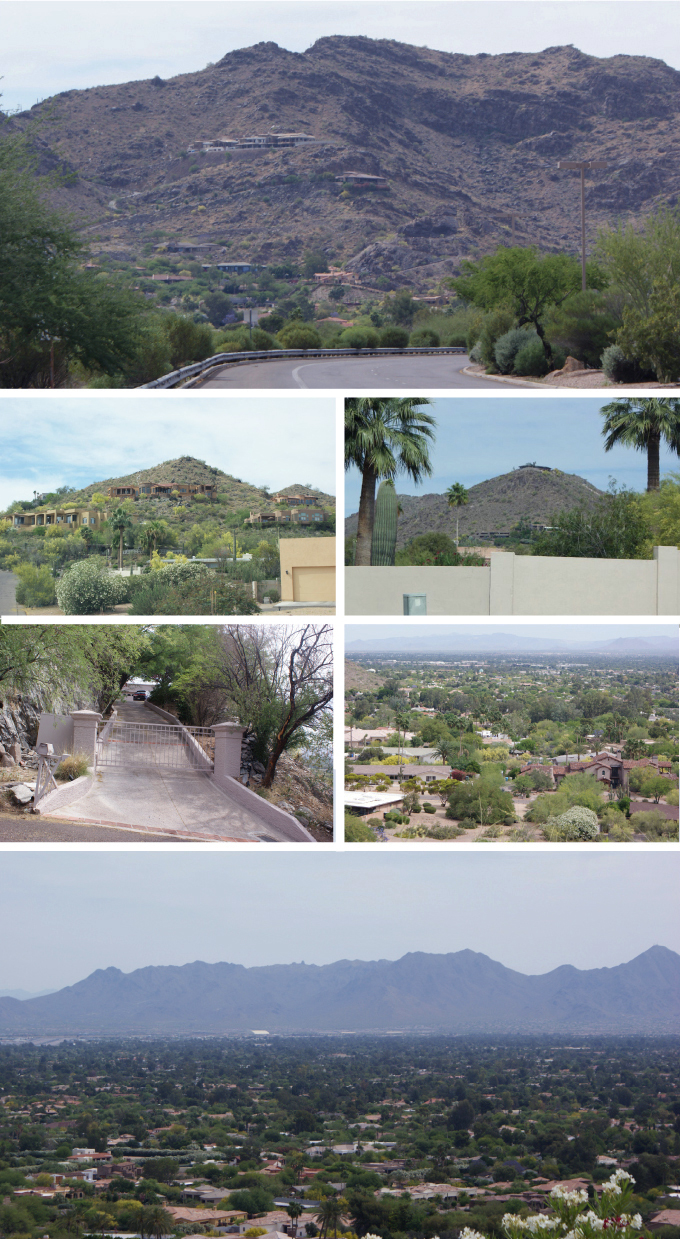 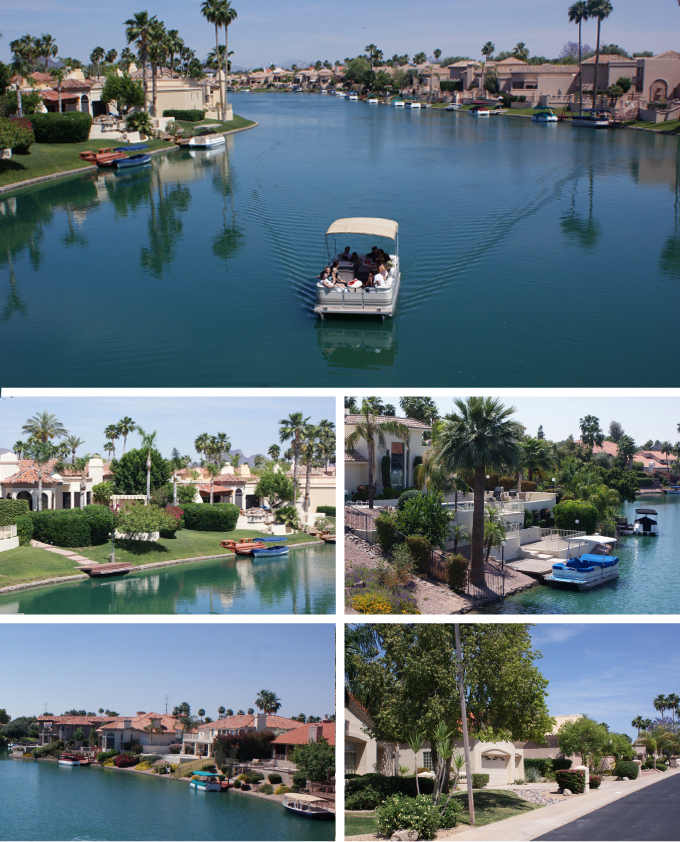 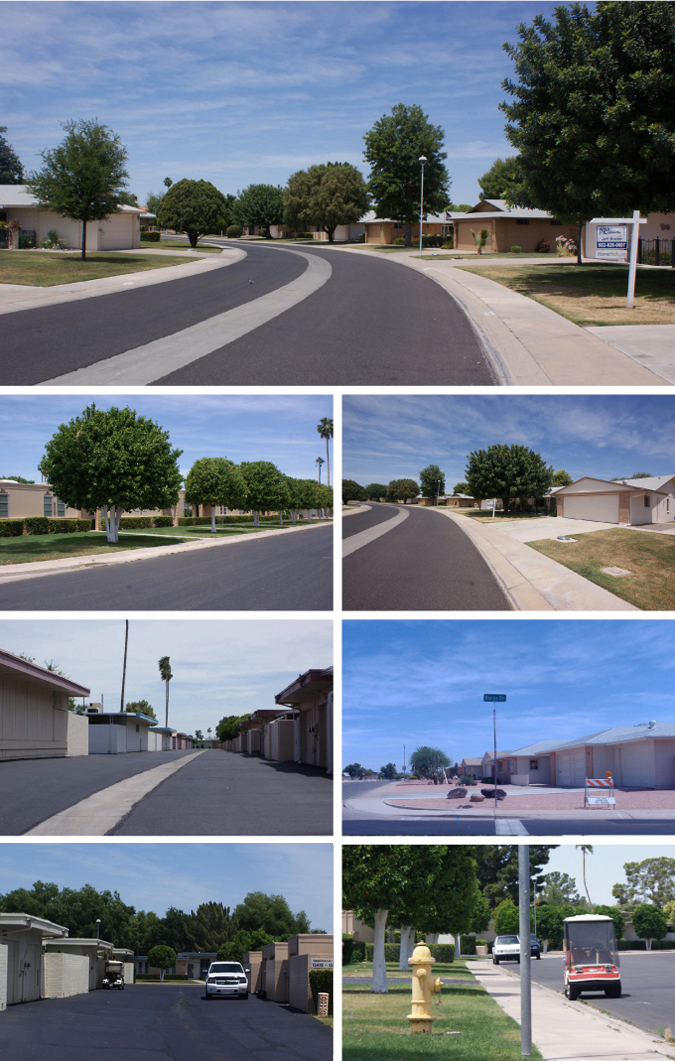